Hedge funds and large money managers usually invest with a focus on the long-term horizon and, therefore, short-lived dips on the charts, usually don’t make them change their opinion towards a company. This time it may be different. During the first 6 weeks of the fourth quarter we observed increased volatility and small-cap stocks underperformed the market. Hedge fund investor letters indicated that they are cutting their overall exposure, closing out some position and doubling down on others. Let’s take a look at the hedge fund sentiment towards Oracle Corporation (NASDAQ:ORCL) to find out whether it was one of their high conviction long-term ideas.

Is Oracle Corporation (NASDAQ:ORCL) the right investment to pursue these days? Prominent investors are taking a pessimistic view. The number of bullish hedge fund bets fell by 1 recently.

While collecting more data about Oracle Corporation (NASDAQ:ORCL), we found ClearBridge Value Trust’s Quarterly Report, in which, the fund shares its views on the company. The fund was bullish in its commentary on the American multinational computer technology corporation, which is given below:

“Oracle (ORCL), in the IT sector, is the dominant provider of on-premise database software for large enterprises globally. While it is facing some secular challenges, Oracle has been steadily buying back stock; and with the resurgence in private cloud and more flexible licensing options, Oracle’s position with customers is starting to improve.”

Heading into the fourth quarter of 2018, a total of 49 of the hedge funds tracked by Insider Monkey were long this stock, a change of -2% from one quarter earlier. It’s not surprising that Oracle was not one of the 30 most popular stocks among hedge funds.

Below, you can check out the change in hedge fund sentiment towards ORCL over the last 13 quarters. With the smart money’s capital changing hands, there exists an “upper tier” of notable hedge fund managers who were upping their holdings significantly (or already accumulated large positions). 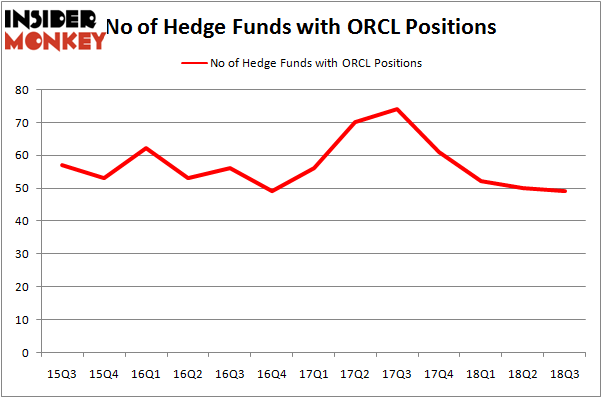 Because Oracle Corporation (NASDAQ:ORCL) has experienced declining sentiment from hedge fund managers, it’s easy to see that there were a few money managers who were dropping their entire stakes last quarter. It’s worth mentioning that Anthony Bozza’s Lakewood Capital Management said goodbye to the largest position of all the hedgies followed by Insider Monkey, valued at about $9.3 million in stock. Bart Baum’s fund, Ionic Capital Management, also dropped its stock, about $6.8 million worth. These moves are intriguing to say the least, as total hedge fund interest fell by 1 funds last quarter.

As you can see these stocks had an average of 44.75 hedge funds with bullish positions and the average amount invested in these stocks was $4206 million. That figure was $8089 million in ORCL’s case. Citigroup Inc. (NYSE:C) is the most popular stock in this table. On the other hand Toyota Motor Corporation (NYSE:TM) is the least popular one with only 9 bullish hedge fund positions. Oracle Corporation (NASDAQ:ORCL) is not the most popular stock in this group but hedge fund interest is still above average. This is a slightly positive signal but we’d rather spend our time researching stocks that hedge funds are piling on. In this regard C might be a better candidate to consider a long position.