Is OneSpaWorld Holdings Limited (OSW) A Good Stock To Buy?

Legendary investors such as Jeffrey Talpins and Seth Klarman earn enormous amounts of money for themselves and their investors by doing in-depth research on small-cap stocks that big brokerage houses don’t publish. Small cap stocks -especially when they are screened well- can generate substantial outperformance versus a boring index fund. That’s why we analyze the activity of those elite funds in these small-cap stocks. In the following paragraphs, we analyze OneSpaWorld Holdings Limited (NASDAQ:OSW) from the perspective of those elite funds.

Hedge fund interest in OneSpaWorld Holdings Limited (NASDAQ:OSW) shares was flat at the end of last quarter. This is usually a negative indicator. The level and the change in hedge fund popularity aren’t the only variables you need to analyze to decipher hedge funds’ perspectives. A stock may witness a boost in popularity but it may still be less popular than similarly priced stocks. That’s why at the end of this article we will examine companies such as TCG BDC, Inc. (NASDAQ:CGBD), Zymeworks Inc. (NYSE:ZYME), and Interface, Inc. (NASDAQ:TILE) to gather more data points. Our calculations also showed that OSW isn’t among the 30 most popular stocks among hedge funds (see the video below).

According to most investors, hedge funds are seen as underperforming, old investment tools of yesteryear. While there are greater than 8000 funds trading today, Our experts hone in on the upper echelon of this club, around 750 funds. It is estimated that this group of investors control the lion’s share of the smart money’s total asset base, and by tailing their best stock picks, Insider Monkey has identified many investment strategies that have historically beaten the S&P 500 index. Insider Monkey’s flagship hedge fund strategy defeated the S&P 500 index by around 5 percentage points annually since its inception in May 2014. We were able to generate large returns even by identifying short candidates. Our portfolio of short stocks lost 25.7% since February 2017 (through September 30th) even though the market was up more than 33% during the same period. We just shared a list of 10 short targets in our latest quarterly update .

What does smart money think about OneSpaWorld Holdings Limited (NASDAQ:OSW)?

At the end of the second quarter, a total of 11 of the hedge funds tracked by Insider Monkey were bullish on this stock, a change of 0% from the first quarter of 2019. The graph below displays the number of hedge funds with bullish position in OSW over the last 16 quarters. With hedgies’ sentiment swirling, there exists a select group of notable hedge fund managers who were boosting their stakes substantially (or already accumulated large positions). 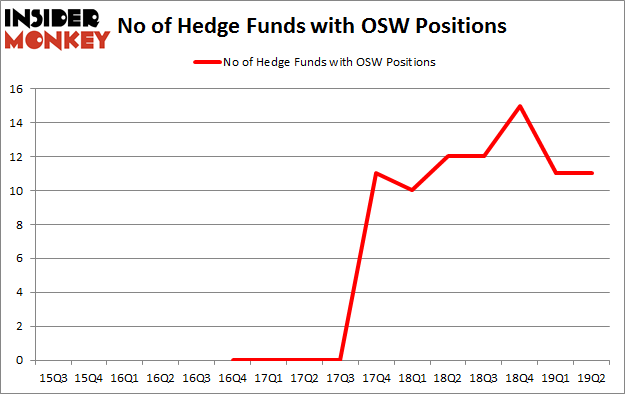 More specifically, Greenhouse Funds was the largest shareholder of OneSpaWorld Holdings Limited (NASDAQ:OSW), with a stake worth $38.2 million reported as of the end of March. Trailing Greenhouse Funds was Deep Field Asset Management, which amassed a stake valued at $15.2 million. Stormborn Capital Management, Hudson Way Capital Management, and Driehaus Capital were also very fond of the stock, giving the stock large weights in their portfolios.

Judging by the fact that OneSpaWorld Holdings Limited (NASDAQ:OSW) has experienced declining sentiment from hedge fund managers, we can see that there were a few fund managers that decided to sell off their positions entirely by the end of the second quarter. Intriguingly, Steve Pigott’s Fort Baker Capital Management dropped the largest position of the 750 funds tracked by Insider Monkey, totaling close to $6.8 million in stock. Steve Pei’s fund, Gratia Capital, also dumped its stock, about $2.5 million worth. These moves are important to note, as aggregate hedge fund interest stayed the same (this is a bearish signal in our experience).

As you can see these stocks had an average of 10.75 hedge funds with bullish positions and the average amount invested in these stocks was $111 million. That figure was $86 million in OSW’s case. Zymeworks Inc. (NYSE:ZYME) is the most popular stock in this table. On the other hand TCG BDC, Inc. (NASDAQ:CGBD) is the least popular one with only 8 bullish hedge fund positions. OneSpaWorld Holdings Limited (NASDAQ:OSW) is not the most popular stock in this group but hedge fund interest is still above average. This is a slightly positive signal but we’d rather spend our time researching stocks that hedge funds are piling on. Our calculations showed that top 20 most popular stocks among hedge funds returned 24.4% in 2019 through September 30th and outperformed the S&P 500 ETF (SPY) by 4 percentage points. Unfortunately OSW wasn’t nearly as popular as these 20 stocks and hedge funds that were betting on OSW were disappointed as the stock returned 0.2% during the third quarter and underperformed the market. If you are interested in investing in large cap stocks with huge upside potential, you should check out the top 20 most popular stocks among hedge funds as many of these stocks already outperformed the market so far this year.