Is Omnicom Group Inc. (OMC) A Good Stock To Buy?

A whopping number of 13F filings filed with U.S. Securities and Exchange Commission has been processed by Insider Monkey so that individual investors can look at the overall hedge fund sentiment towards the stocks included in their watchlists. These freshly-submitted public filings disclose money managers’ equity positions as of the end of the three-month period that ended December 31, so let’s proceed with the discussion of the hedge fund sentiment on Omnicom Group Inc. (NYSE:OMC).

Omnicom Group Inc. (NYSE:OMC) shareholders have witnessed a decrease in activity from the world’s largest hedge funds of late. OMC was in 18 hedge funds’ portfolios at the end of December. There were 19 hedge funds in our database with OMC positions at the end of the previous quarter. Our calculations also showed that OMC isn’t among the 30 most popular stocks among hedge funds.

In today’s marketplace there are tons of metrics stock market investors employ to evaluate publicly traded companies. Two of the most under-the-radar metrics are hedge fund and insider trading signals. Our researchers have shown that, historically, those who follow the best picks of the best fund managers can outclass the broader indices by a significant margin (see the details here).

What does the smart money think about Omnicom Group Inc. (NYSE:OMC)? 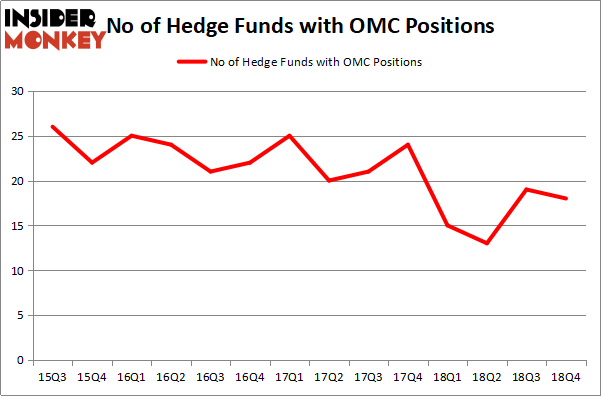 Among these funds, Pzena Investment Management held the most valuable stake in Omnicom Group Inc. (NYSE:OMC), which was worth $504.1 million at the end of the third quarter. On the second spot was Ariel Investments which amassed $67.9 million worth of shares. Moreover, Two Sigma Advisors, GLG Partners, and International Value Advisers were also bullish on Omnicom Group Inc. (NYSE:OMC), allocating a large percentage of their portfolios to this stock.

Seeing as Omnicom Group Inc. (NYSE:OMC) has witnessed declining sentiment from the smart money, it’s easy to see that there is a sect of hedgies that decided to sell off their full holdings by the end of the third quarter. Intriguingly, Steve Cohen’s Point72 Asset Management cut the biggest position of all the hedgies followed by Insider Monkey, worth close to $21.9 million in call options. Israel Englander’s fund, Millennium Management, also dumped its call options, about $19.2 million worth. These moves are intriguing to say the least, as total hedge fund interest dropped by 1 funds by the end of the third quarter.

As you can see these stocks had an average of 31.25 hedge funds with bullish positions and the average amount invested in these stocks was $1099 million. That figure was $765 million in OMC’s case. Weyerhaeuser Co. (NYSE:WY) is the most popular stock in this table. On the other hand American Water Works Company, Inc. (NYSE:AWK) is the least popular one with only 28 bullish hedge fund positions. Compared to these stocks Omnicom Group Inc. (NYSE:OMC) is even less popular than AWK. Our calculations showed that top 15 most popular stocks among hedge funds returned 19.7% through March 15th and outperformed the S&P 500 ETF (SPY) by 6.6 percentage points. Unfortunately OMC wasn’t in this group. Hedge funds that bet on OMC were disappointed as the stock returned 4% and underperformed the market. If you are interested in investing in large cap stocks, you should check out the top 15 hedge fund stocks as 13 of these outperformed the market.