Is Office Depot Inc (ODP) A Good Stock To Buy?

At Insider Monkey, we pore over the filings of nearly 750 top investment firms every quarter, a process we have now completed for the latest reporting period. The data we’ve gathered as a result gives us access to a wealth of collective knowledge based on these firms’ portfolio holdings as of June 28. In this article, we will use that wealth of knowledge to determine whether or not Office Depot Inc (NASDAQ:ODP) makes for a good investment right now.

Is Office Depot Inc (NASDAQ:ODP) a cheap investment now? Money managers are taking a pessimistic view. The number of bullish hedge fund positions were cut by 2 in recent months. Our calculations also showed that ODP isn’t among the 30 most popular stocks among hedge funds (see the video below). ODP was in 20 hedge funds’ portfolios at the end of June. There were 22 hedge funds in our database with ODP holdings at the end of the previous quarter. 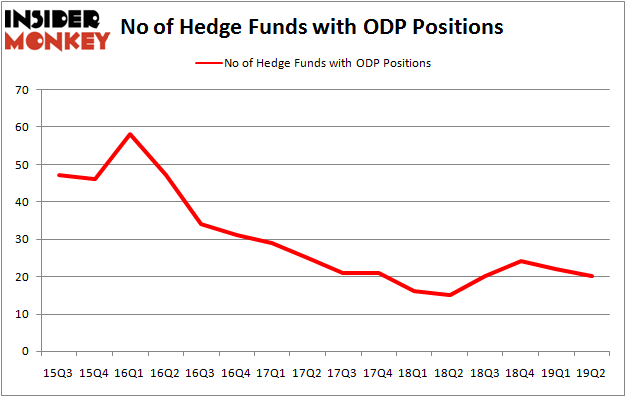 What have hedge funds been doing with Office Depot Inc (NASDAQ:ODP)?

Heading into the third quarter of 2019, a total of 20 of the hedge funds tracked by Insider Monkey held long positions in this stock, a change of -9% from the previous quarter. Below, you can check out the change in hedge fund sentiment towards ODP over the last 16 quarters. With the smart money’s positions undergoing their usual ebb and flow, there exists an “upper tier” of notable hedge fund managers who were adding to their holdings considerably (or already accumulated large positions).

More specifically, Canyon Capital Advisors was the largest shareholder of Office Depot Inc (NASDAQ:ODP), with a stake worth $25.6 million reported as of the end of March. Trailing Canyon Capital Advisors was Renaissance Technologies, which amassed a stake valued at $13.3 million. AQR Capital Management, Arrowstreet Capital, and Two Sigma Advisors were also very fond of the stock, giving the stock large weights in their portfolios.

Because Office Depot Inc (NASDAQ:ODP) has witnessed bearish sentiment from hedge fund managers, it’s safe to say that there exists a select few hedge funds that slashed their entire stakes in the second quarter. Intriguingly, Steve Cohen’s Point72 Asset Management cut the largest position of the “upper crust” of funds monitored by Insider Monkey, worth about $5.7 million in stock, and David Costen Haley’s HBK Investments was right behind this move, as the fund sold off about $1.2 million worth. These bearish behaviors are important to note, as aggregate hedge fund interest dropped by 2 funds in the second quarter.