Nutanix, Inc. (NASDAQ:NTNX) investors should pay attention to a decrease in activity from the world’s largest hedge funds of late. NTNX was in 37 hedge funds’ portfolios at the end of the fourth quarter of 2018. There were 39 hedge funds in our database with NTNX positions at the end of the previous quarter. Our calculations also showed that NTNX isn’t among the 30 most popular stocks among hedge funds.

What have hedge funds been doing with Nutanix, Inc. (NASDAQ:NTNX)?

At the end of the fourth quarter, a total of 37 of the hedge funds tracked by Insider Monkey were bullish on this stock, a change of -5% from the second quarter of 2018. The graph below displays the number of hedge funds with bullish position in NTNX over the last 14 quarters. So, let’s check out which hedge funds were among the top holders of the stock and which hedge funds were making big moves. 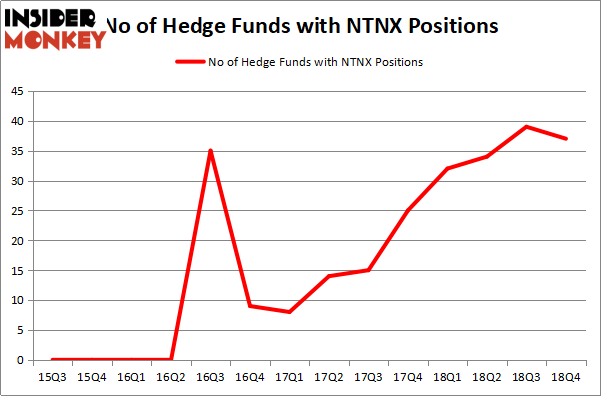 More specifically, D E Shaw was the largest shareholder of Nutanix, Inc. (NASDAQ:NTNX), with a stake worth $127 million reported as of the end of September. Trailing D E Shaw was Hunt Lane Capital, which amassed a stake valued at $67.4 million. Bloom Tree Partners, Renaissance Technologies, and Citadel Investment Group were also very fond of the stock, giving the stock large weights in their portfolios.

Since Nutanix, Inc. (NASDAQ:NTNX) has experienced bearish sentiment from hedge fund managers, logic holds that there exists a select few fund managers that elected to cut their full holdings by the end of the third quarter. Interestingly, Peter Rathjens, Bruce Clarke and John Campbell’s Arrowstreet Capital said goodbye to the biggest investment of the 700 funds monitored by Insider Monkey, valued at close to $20.8 million in stock, and Principal Global Investors’s Columbus Circle Investors was right behind this move, as the fund sold off about $15.9 million worth. These bearish behaviors are intriguing to say the least, as aggregate hedge fund interest dropped by 2 funds by the end of the third quarter.

As you can see these stocks had an average of 17 hedge funds with bullish positions and the average amount invested in these stocks was $499 million. That figure was $550 million in NTNX’s case. Tripadvisor Inc (NASDAQ:TRIP) is the most popular stock in this table. On the other hand China Southern Airlines Co Ltd (NYSE:ZNH) is the least popular one with only 4 bullish hedge fund positions. Compared to these stocks Nutanix, Inc. (NASDAQ:NTNX) is more popular among hedge funds. Our calculations showed that top 15 most popular stocks among hedge funds returned 21.3% through April 8th and outperformed the S&P 500 ETF (SPY) by more than 5 percentage points. Unfortunately NTNX wasn’t in this group. Hedge funds that bet on NTNX were disappointed as the stock lost 8.8% and underperformed the market. If you are interested in investing in large cap stocks, you should check out the top 15 hedge fund stocks as 12 of these outperformed the market.