How do you pick the next stock to invest in? One way would be to spend days of research browsing through thousands of publicly traded companies. However, an easier way is to look at the stocks that smart money investors are collectively bullish on. Hedge funds and other institutional investors usually invest large amounts of capital and have to conduct due diligence while choosing their next pick. They don’t always get it right, but, on average, their stock picks historically generated strong returns after adjusting for known risk factors. With this in mind, let’s take a look at the recent hedge fund activity surrounding Novartis AG (NYSE:NVS).

Novartis AG (NYSE:NVS) investors should pay attention to a decrease in enthusiasm from smart money lately. Our calculations also showed that NVS isn’t among the 30 most popular stocks among hedge funds.

In the financial world there are dozens of indicators shareholders put to use to size up stocks. Two of the less utilized indicators are hedge fund and insider trading interest. Our researchers have shown that, historically, those who follow the best picks of the best investment managers can beat the market by a significant margin (see the details here).

Unlike some fund managers who are betting on Dow reaching 40000 in a year, our long-short investment strategy doesn’t rely on bull markets to deliver double digit returns. We only rely on hedge fund buy/sell signals. Let’s view the latest hedge fund action surrounding Novartis AG (NYSE:NVS).

What have hedge funds been doing with Novartis AG (NYSE:NVS)? 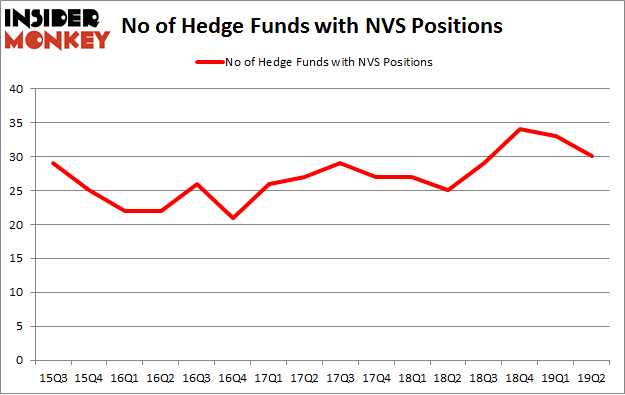 More specifically, Fisher Asset Management was the largest shareholder of Novartis AG (NYSE:NVS), with a stake worth $736.6 million reported as of the end of March. Trailing Fisher Asset Management was Renaissance Technologies, which amassed a stake valued at $371.6 million. Arrowstreet Capital, Alyeska Investment Group, and Citadel Investment Group were also very fond of the stock, giving the stock large weights in their portfolios.

Due to the fact that Novartis AG (NYSE:NVS) has witnessed declining sentiment from the entirety of the hedge funds we track, logic holds that there is a sect of fund managers that slashed their positions entirely by the end of the second quarter. Intriguingly, Bain Capital’s Brookside Capital dumped the biggest investment of the “upper crust” of funds watched by Insider Monkey, comprising an estimated $84.8 million in stock, and Doug Silverman and Alexander Klabin’s Senator Investment Group was right behind this move, as the fund sold off about $57.7 million worth. These moves are important to note, as aggregate hedge fund interest fell by 3 funds by the end of the second quarter.

As you can see these stocks had an average of 58.5 hedge funds with bullish positions and the average amount invested in these stocks was $4410 million. That figure was $1682 million in NVS’s case. Comcast Corporation (NASDAQ:CMCSA) is the most popular stock in this table. On the other hand China Mobile Limited (NYSE:CHL) is the least popular one with only 13 bullish hedge fund positions. Novartis AG (NYSE:NVS) is not the least popular stock in this group but hedge fund interest is still below average. This is a slightly negative signal and we’d rather spend our time researching stocks that hedge funds are piling on. Our calculations showed that top 20 most popular stocks among hedge funds returned 24.4% in 2019 through September 30th and outperformed the S&P 500 ETF (SPY) by 4 percentage points. Unfortunately NVS wasn’t nearly as popular as these 20 stocks (hedge fund sentiment was quite bearish); NVS investors were disappointed as the stock returned -4.8% during the third quarter and underperformed the market. If you are interested in investing in large cap stocks with huge upside potential, you should check out the top 20 most popular stocks among hedge funds as many of these stocks already outperformed the market so far in 2019.