During the first half of the fourth quarter the Russell 2000 ETF (IWM) lagged the larger S&P 500 ETF (SPY) by about 4 percentage points as investors worried over the possible ramifications of rising interest rates. The hedge funds and institutional investors we track typically invest more in smaller-cap stocks than an average investor (i.e. only 298 S&P 500 constituents were among the 500 most popular stocks among hedge funds), and we have seen data that shows those funds paring back their overall exposure. Those funds cutting positions in small-caps is one reason why volatility has increased. In the following paragraphs, we take a closer look at what hedge funds and prominent investors think of Norwegian Cruise Line Holdings Ltd (NASDAQ:NCLH) and see how the stock is affected by the recent hedge fund activity.

Is Norwegian Cruise Line Holdings Ltd (NASDAQ:NCLH) a buy here? Hedge funds are becoming hopeful. The number of bullish hedge fund bets went up by 12 in recent months. Our calculations also showed that NCLH isn’t among the 30 most popular stocks among hedge funds. NCLH was in 41 hedge funds’ portfolios at the end of the third quarter of 2018. There were 29 hedge funds in our database with NCLH holdings at the end of the previous quarter. 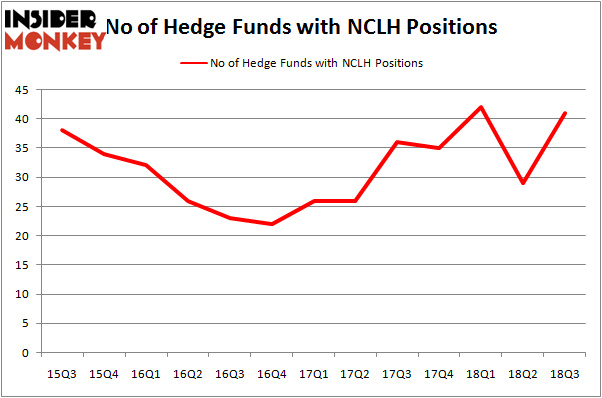 The largest stake in Norwegian Cruise Line Holdings Ltd (NASDAQ:NCLH) was held by Eminence Capital, which reported holding $179 million worth of stock at the end of September. It was followed by Balyasny Asset Management with a $105 million position. Other investors bullish on the company included Two Sigma Advisors, Capital Growth Management, and Roystone Capital Partners.

As you can see these stocks had an average of 29.5 hedge funds with bullish positions and the average amount invested in these stocks was $1554 million. That figure was $1013 million in NCLH’s case. CF Industries Holdings, Inc. (NYSE:CF) is the most popular stock in this table. On the other hand Targa Resources Corp (NYSE:TRGP) is the least popular one with only 21 bullish hedge fund positions. Compared to these stocks Norwegian Cruise Line Holdings Ltd (NASDAQ:NCLH) is more popular among hedge funds. Considering that hedge funds are fond of this stock in relation to its market cap peers, it may be a good idea to analyze it in detail and potentially include it in your portfolio.

Is PotlatchDeltic Corporation (PCH) A Good Stock To Buy?
Monthly Newsletter Strategy
Download a free copy of our newsletter and see the details inside!
Hedge Fund Resource Center
Related News
Will Cruise Stocks Sink Your Portfolio in 2018? Is Norwegian Cruise Line Holdings Ltd (NCLH) A Better Stock Than Its Peers? Here’s Why These Five Stocks Are in Spotlight Today 5 Major Nasdaq Stocks That Hit 52-Week Lows This Week CEOs Are Buying and Selling Shares of These Companies Poor First-Quarter Results Push These Five Stocks Lower Today A Look At Four Trending Stocks and Latest Developments Behind Their Moves The 10 Best Islands to Visit in 2019 5 Most Socially Responsible Companies in America 5 Ways You Can Eliminate Credit Card Debt
Billionaire Hedge Funds