Is Norfolk Southern Corp. (NSC) A Good Stock To Buy?

Is Norfolk Southern Corp. (NYSE:NSC) a marvelous investment now? Prominent investors are becoming more confident. The number of bullish hedge fund bets advanced by 2 in recent months. Our calculations also showed that NSC isn’t among the 30 most popular stocks among hedge funds (click for Q4 rankings and see the video below for Q3 rankings). NSC was in 52 hedge funds’ portfolios at the end of December. There were 50 hedge funds in our database with NSC holdings at the end of the previous quarter.

We leave no stone unturned when looking for the next great investment idea. For example Europe is set to become the world’s largest cannabis market, so we check out this European marijuana stock pitch. We read hedge fund investor letters and listen to stock pitches at hedge fund conferences, and and go through short-term trade recommendations like this one. We even check out the recommendations of services with hard to believe track records. In January, we recommended a long position in one of the most shorted stocks in the market, and that stock returned more than 50% despite the large losses in the market since our recommendation. With all of this in mind let’s view the recent hedge fund action encompassing Norfolk Southern Corp. (NYSE:NSC).

What does smart money think about Norfolk Southern Corp. (NYSE:NSC)? 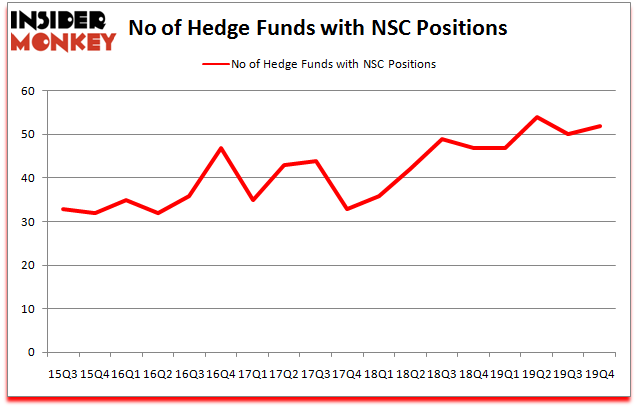 Of the funds tracked by Insider Monkey, Soroban Capital Partners, managed by Eric W. Mandelblatt and Gaurav Kapadia, holds the most valuable position in Norfolk Southern Corp. (NYSE:NSC). Soroban Capital Partners has a $513.5 million position in the stock, comprising 6.7% of its 13F portfolio. Sitting at the No. 2 spot is Millennium Management, led by Israel Englander, holding a $155.4 million position; the fund has 0.2% of its 13F portfolio invested in the stock. Other members of the smart money with similar optimism contain Doug Silverman and Alexander Klabin’s Senator Investment Group, Andrew Immerman and Jeremy Schiffman’s Palestra Capital Management and Andreas Halvorsen’s Viking Global. In terms of the portfolio weights assigned to each position Lodge Hill Capital allocated the biggest weight to Norfolk Southern Corp. (NYSE:NSC), around 7.91% of its 13F portfolio. Soroban Capital Partners is also relatively very bullish on the stock, earmarking 6.73 percent of its 13F equity portfolio to NSC.

With a general bullishness amongst the heavyweights, some big names were leading the bulls’ herd. Viking Global, managed by Andreas Halvorsen, assembled the biggest position in Norfolk Southern Corp. (NYSE:NSC). Viking Global had $121.1 million invested in the company at the end of the quarter. Aaron Cowen’s Suvretta Capital Management also initiated a $105.2 million position during the quarter. The other funds with new positions in the stock are Robert Pitts’s Steadfast Capital Management, Steve Cohen’s Point72 Asset Management, and Richard SchimeláandáLawrence Sapanski’s Cinctive Capital Management.

As you can see these stocks had an average of 41.75 hedge funds with bullish positions and the average amount invested in these stocks was $1731 million. That figure was $1931 million in NSC’s case. HCA Healthcare Inc (NYSE:HCA) is the most popular stock in this table. On the other hand TC Energy Corporation (NYSE:TRP) is the least popular one with only 22 bullish hedge fund positions. Norfolk Southern Corp. (NYSE:NSC) is not the most popular stock in this group but hedge fund interest is still above average. This is a slightly positive signal but we’d rather spend our time researching stocks that hedge funds are piling on. Our calculations showed that top 20 most popular stocks among hedge funds returned 41.3% in 2019 and outperformed the S&P 500 ETF (SPY) by 10.1 percentage points. These stocks lost 12.9% in 2020 through March 9th but beat the market by 1.9 percentage points. Unfortunately NSC wasn’t nearly as popular as these 20 stocks and hedge funds that were betting on NSC were disappointed as the stock returned -20.1% during the same time period and underperformed the market. If you are interested in investing in large cap stocks with huge upside potential, you should check out the top 20 most popular stocks among hedge funds as many of these stocks already outperformed the market so far this year.