Is Norbord Inc. (OSB) A Good Stock To Buy?

Is Norbord Inc. (NYSE:OSB) a good investment right now? We check hedge fund and billionaire investor sentiment before delving into hours of research. Hedge funds spend millions of dollars on Ivy League graduates, expert networks, and get tips from investment bankers and industry insiders. Sure they sometimes fail miserably, but their consensus stock picks historically outperformed the market after adjusting for known risk factors.

Norbord Inc. (NYSE:OSB) has experienced a decrease in hedge fund interest of late. Our calculations also showed that OSB isn’t among the 30 most popular stocks among hedge funds (view the video below).

At the end of the second quarter, a total of 6 of the hedge funds tracked by Insider Monkey held long positions in this stock, a change of -14% from the previous quarter. Below, you can check out the change in hedge fund sentiment towards OSB over the last 16 quarters. So, let’s review which hedge funds were among the top holders of the stock and which hedge funds were making big moves. 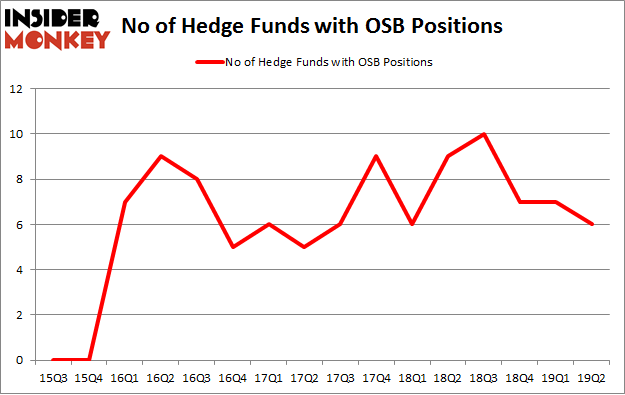 The largest stake in Norbord Inc. (NYSE:OSB) was held by Renaissance Technologies, which reported holding $9.7 million worth of stock at the end of March. It was followed by Millennium Management with a $1.1 million position. Other investors bullish on the company included Two Sigma Advisors, Waratah Capital Advisors, and Gotham Asset Management.

Since Norbord Inc. (NYSE:OSB) has experienced falling interest from the aggregate hedge fund industry, logic holds that there lies a certain “tier” of hedgies that elected to cut their entire stakes last quarter. Interestingly, Ken Griffin’s Citadel Investment Group dumped the biggest position of the “upper crust” of funds followed by Insider Monkey, worth an estimated $6.7 million in stock. Steve Cohen’s fund, Point72 Asset Management, also sold off its stock, about $0.3 million worth. These bearish behaviors are intriguing to say the least, as total hedge fund interest dropped by 1 funds last quarter.

As you can see these stocks had an average of 12.5 hedge funds with bullish positions and the average amount invested in these stocks was $90 million. That figure was $13 million in OSB’s case. Inter Parfums, Inc. (NASDAQ:IPAR) is the most popular stock in this table. On the other hand Great Western Bancorp Inc (NYSE:GWB) is the least popular one with only 9 bullish hedge fund positions. Compared to these stocks Norbord Inc. (NYSE:OSB) is even less popular than GWB. Hedge funds dodged a bullet by taking a bearish stance towards OSB. Our calculations showed that the top 20 most popular hedge fund stocks returned 24.4% in 2019 through September 30th and outperformed the S&P 500 ETF (SPY) by 4 percentage points. Unfortunately OSB wasn’t nearly as popular as these 20 stocks (hedge fund sentiment was very bearish); OSB investors were disappointed as the stock returned -2.1% during the third quarter and underperformed the market. If you are interested in investing in large cap stocks with huge upside potential, you should check out the top 20 most popular stocks among hedge funds as many of these stocks already outperformed the market so far in 2019.