The latest 13F reporting period has come and gone, and Insider Monkey is again at the forefront when it comes to making use of this gold mine of data. Insider Monkey finished processing more than 730 13F filings submitted by hedge funds and prominent investors. These filings show these funds’ portfolio positions as of June 28th, 2019. What do these smart investors think about Noodles & Co (NASDAQ:NDLS)?

Noodles & Co (NASDAQ:NDLS) has seen a decrease in activity from the world’s largest hedge funds of late. Our calculations also showed that NDLS isn’t among the 30 most popular stocks among hedge funds (see the video below).

In addition to following the biggest hedge funds for investment ideas, we also share stock pitches from conferences, investor letters and other sources  like this one where the fund manager is talking about two under the radar 1000% return potential stocks: first one in internet infrastructure and the second in the heart of advertising market. We use hedge fund buy/sell signals to determine whether to conduct in-depth analysis of these stock ideas which take days. We’re going to take a look at the new hedge fund action surrounding Noodles & Co (NASDAQ:NDLS).

What have hedge funds been doing with Noodles & Co (NASDAQ:NDLS)? 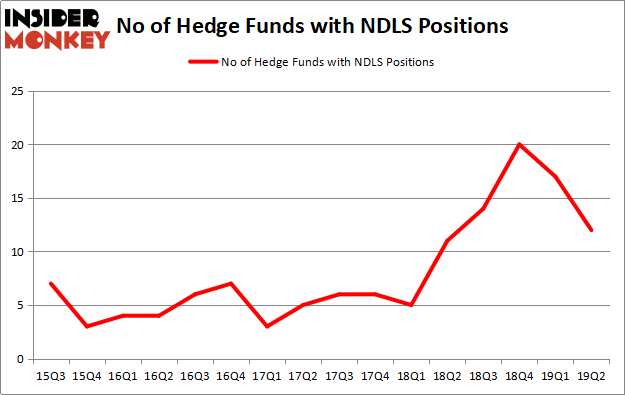 Due to the fact that Noodles & Co (NASDAQ:NDLS) has experienced bearish sentiment from the aggregate hedge fund industry, it’s safe to say that there lies a certain “tier” of funds that slashed their entire stakes by the end of the second quarter. It’s worth mentioning that Richard Driehaus’s Driehaus Capital sold off the biggest stake of all the hedgies monitored by Insider Monkey, valued at about $5 million in stock, and Andrew Feldstein and Stephen Siderow’s Blue Mountain Capital was right behind this move, as the fund dumped about $0.7 million worth. These transactions are interesting, as aggregate hedge fund interest was cut by 5 funds by the end of the second quarter.

As you can see these stocks had an average of 5 hedge funds with bullish positions and the average amount invested in these stocks was $24 million. That figure was $90 million in NDLS’s case. Altisource Portfolio Solutions S.A. (NASDAQ:ASPS) is the most popular stock in this table. On the other hand Artesian Resources Corporation (NASDAQ:ARTNA) is the least popular one with only 3 bullish hedge fund positions. Compared to these stocks Noodles & Co (NASDAQ:NDLS) is more popular among hedge funds. Our calculations showed that top 20 most popular stocks among hedge funds returned 24.4% in 2019 through September 30th and outperformed the S&P 500 ETF (SPY) by 4 percentage points. Unfortunately NDLS wasn’t nearly as popular as these 20 stocks and hedge funds that were betting on NDLS were disappointed as the stock returned -28.2% during the third quarter and underperformed the market. If you are interested in investing in large cap stocks with huge upside potential, you should check out the top 20 most popular stocks among hedge funds as many of these stocks already outperformed the market in Q3.