Is Nicholas Financial, Inc. (NICK) A Good Stock To Buy?

The latest 13F reporting period has come and gone, and Insider Monkey is again at the forefront when it comes to making use of this gold mine of data. We at Insider Monkey have plowed through 752 13F filings that hedge funds and well-known value investors are required to file by the SEC. The 13F filings show the funds’ and investors’ portfolio positions as of September 30th. In this article we look at what those investors think of Nicholas Financial, Inc. (NASDAQ:NICK).

Hedge fund interest in Nicholas Financial, Inc. (NASDAQ:NICK) shares was flat at the end of last quarter. This is usually a negative indicator. The level and the change in hedge fund popularity aren’t the only variables you need to analyze to decipher hedge funds’ perspectives. A stock may witness a boost in popularity but it may still be less popular than similarly priced stocks. That’s why at the end of this article we will examine companies such as IEC Electronics Corp. (NYSE:IEC), Strata Skin Sciences, Inc. (NASDAQ:SSKN), and Ampio Pharmaceuticals, Inc. (NYSE:AMPE) to gather more data points. Our calculations also showed that NICK isn’t among the 30 most popular stocks among hedge funds (see the video below).

What does smart money think about Nicholas Financial, Inc. (NASDAQ:NICK)?

Heading into the fourth quarter of 2019, a total of 2 of the hedge funds tracked by Insider Monkey were bullish on this stock, a change of 0% from the previous quarter. Below, you can check out the change in hedge fund sentiment towards NICK over the last 17 quarters. So, let’s find out which hedge funds were among the top holders of the stock and which hedge funds were making big moves. 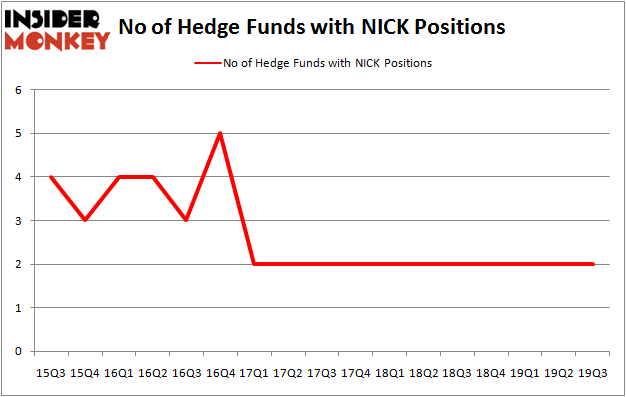 As you can see these stocks had an average of 4.25 hedge funds with bullish positions and the average amount invested in these stocks was $8 million. That figure was $22 million in NICK’s case. CARBO Ceramics Inc. (NYSE:CRR) is the most popular stock in this table. On the other hand IEC Electronics Corp. (NYSE:IEC) is the least popular one with only 3 bullish hedge fund positions. Compared to these stocks Nicholas Financial, Inc. (NASDAQ:NICK) is even less popular than IEC. Hedge funds dodged a bullet by taking a bearish stance towards NICK. Our calculations showed that the top 20 most popular hedge fund stocks returned 34.7% in 2019 through November 22nd and outperformed the S&P 500 ETF (SPY) by 8.5 percentage points. Unfortunately NICK wasn’t nearly as popular as these 20 stocks (hedge fund sentiment was very bearish); NICK investors were disappointed as the stock returned 1.6% during the fourth quarter (through 11/22) and underperformed the market. If you are interested in investing in large cap stocks with huge upside potential, you should check out the top 20 most popular stocks among hedge funds as 70 percent of these stocks already outperformed the market so far in Q4.