Hedge fund interest in Nextera Energy Partners LP (NYSE:NEP) shares was flat at the end of last quarter. This is usually a negative indicator. At the end of this article we will also compare NEP to other stocks including Rexnord Corp (NYSE:RXN), The Geo Group, Inc. (NYSE:GEO), and Pampa Energia S.A. (NYSE:PAM) to get a better sense of its popularity. 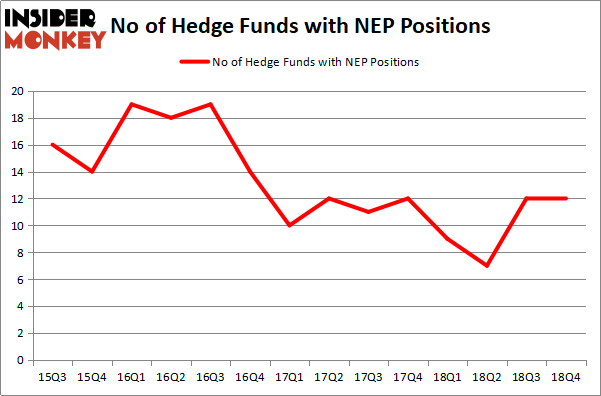 More specifically, Blackstart Capital was the largest shareholder of Nextera Energy Partners LP (NYSE:NEP), with a stake worth $15.2 million reported as of the end of September. Trailing Blackstart Capital was Wexford Capital, which amassed a stake valued at $7.4 million. Millennium Management, Arrowstreet Capital, and Perella Weinberg Partners were also very fond of the stock, giving the stock large weights in their portfolios.

Seeing as Nextera Energy Partners LP (NYSE:NEP) has experienced bearish sentiment from hedge fund managers, it’s easy to see that there was a specific group of fund managers who were dropping their full holdings heading into Q3. It’s worth mentioning that Bernard Lambilliotte’s Ecofin Ltd dumped the biggest position of all the hedgies watched by Insider Monkey, valued at about $9.5 million in stock. Robert Polak’s fund, Anchor Bolt Capital, also cut its stock, about $6.1 million worth. These transactions are intriguing to say the least, as total hedge fund interest stayed the same (this is a bearish signal in our experience).

As you can see these stocks had an average of 20.75 hedge funds with bullish positions and the average amount invested in these stocks was $312 million. That figure was $35 million in NEP’s case. Range Resources Corp. (NYSE:RRC) is the most popular stock in this table. On the other hand Pampa Energia S.A. (NYSE:PAM) is the least popular one with only 15 bullish hedge fund positions. Compared to these stocks Nextera Energy Partners LP (NYSE:NEP) is even less popular than PAM. Hedge funds dodged a bullet by taking a bearish stance towards NEP. Our calculations showed that the top 15 most popular hedge fund stocks returned 24.2% through April 22nd and outperformed the S&P 500 ETF (SPY) by more than 7 percentage points. Unfortunately NEP wasn’t nearly as popular as these 15 stock (hedge fund sentiment was very bearish); NEP investors were disappointed as the stock returned 10.2% and underperformed the market. If you are interested in investing in large cap stocks with huge upside potential, you should check out the top 15 most popular stocks) among hedge funds as 13 of these stocks already outperformed the market this year.