Is Nexa Resources S.A. (NEXA) A Good Stock To Buy ?

Nexa Resources S.A. (NYSE:NEXA) was in 10 hedge funds’ portfolios at the end of the fourth quarter of 2018. NEXA shareholders have witnessed an increase in support from the world’s most elite money managers lately. There were 9 hedge funds in our database with NEXA positions at the end of the previous quarter. Our calculations also showed that NEXA isn’t among the 30 most popular stocks among hedge funds.

How have hedgies been trading Nexa Resources S.A. (NYSE:NEXA)?

Heading into the first quarter of 2019, a total of 10 of the hedge funds tracked by Insider Monkey held long positions in this stock, a change of 11% from the previous quarter. The graph below displays the number of hedge funds with bullish position in NEXA over the last 14 quarters. With hedge funds’ positions undergoing their usual ebb and flow, there exists a few notable hedge fund managers who were upping their stakes substantially (or already accumulated large positions). 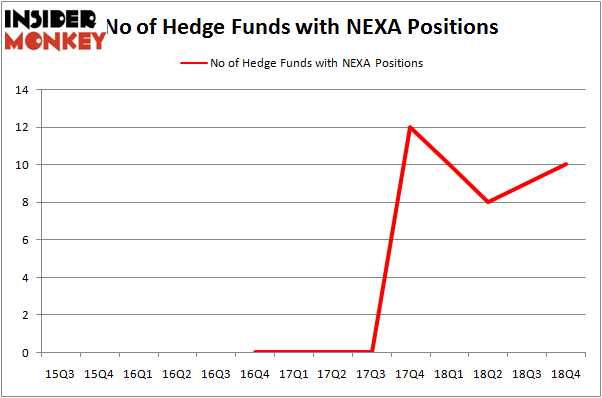 More specifically, GLG Partners was the largest shareholder of Nexa Resources S.A. (NYSE:NEXA), with a stake worth $6.8 million reported as of the end of December. Trailing GLG Partners was Citadel Investment Group, which amassed a stake valued at $2.9 million. Arrowstreet Capital, Renaissance Technologies, and Balyasny Asset Management were also very fond of the stock, giving the stock large weights in their portfolios.

Now, some big names were breaking ground themselves. Springbok Capital, managed by Gavin Saitowitz and Cisco J. del Valle, created the most outsized position in Nexa Resources S.A. (NYSE:NEXA). Springbok Capital had $0.1 million invested in the company at the end of the quarter.

Let’s go over hedge fund activity in other stocks – not necessarily in the same industry as Nexa Resources S.A. (NYSE:NEXA) but similarly valued. These stocks are Axos Financial, Inc. (NYSE:AX), Acushnet Holdings Corp. (NYSE:GOLF), Workiva Inc (NYSE:WK), and Moelis & Company (NYSE:MC). All of these stocks’ market caps are similar to NEXA’s market cap.

As you can see these stocks had an average of 15.75 hedge funds with bullish positions and the average amount invested in these stocks was $76 million. That figure was $19 million in NEXA’s case. Moelis & Company (NYSE:MC) is the most popular stock in this table. On the other hand Acushnet Holdings Corp. (NYSE:GOLF) is the least popular one with only 11 bullish hedge fund positions. Compared to these stocks Nexa Resources S.A. (NYSE:NEXA) is even less popular than GOLF. Hedge funds dodged a bullet by taking a bearish stance towards NEXA. Our calculations showed that the top 15 most popular hedge fund stocks returned 24.2% through April 22nd and outperformed the S&P 500 ETF (SPY) by more than 7 percentage points. Unfortunately NEXA wasn’t nearly as popular as these 15 stock (hedge fund sentiment was very bearish); NEXA investors were disappointed as the stock returned 9.6% and underperformed the market. If you are interested in investing in large cap stocks with huge upside potential, you should check out the top 15 most popular stocks) among hedge funds as 13 of these stocks already outperformed the market this year.