Insider Monkey finished processing more than 700 13F filings made by hedge funds and prominent investors. These filings show these funds’ portfolio positions as of September 30th. What do these smart investors think about Newmont Mining Corp (NYSE:NEM)?

Starting our analysis of the stock with the recent hedge funds sentiment – Newmont Mining Corp (NYSE:NEM) investors should pay attention to a decrease in the number of smart money investors with long positions. At the end of the third quarter, the stock was in 26 hedge fund portfolios, which is down by two from the previous quarter. The company wasn’t one of the 30 most popular stocks among hedge funds.

While gathering more data on Newmont Mining Corp (NYSE:NEM), we tracked down Gabelli Value 25 Fund’s 3rd Quarter Shareholder Letter, in which, the fund discusses the stock. Here is that part of the letter:

“Newmont Mining Corp. (NYSE:NEM) (2.9%) (NEM – $30.20 – NYSE) based in Denver, Colorado, is one of the largest gold mining companies in the world. Founded in 1921 and publicly traded since 1925, NEM is the only gold company included in the S&P 500 Index and Fortune 500. We expect the company to produce approximately 5.2 million ounces of gold and 120 million pounds of copper in 2018, with approximately 70% of this production coming from the United States and Australia. Newmont undertook company wide cost cutting measures during the period 2013 – 2017, lowering its average unit costs base by over 20% during this period. The company has sold non-core assets and has deployed the proceeds from these sales into repaying debt and building new projects which it expects will generate superior rates of return for shareholders. Given Newmont’s largely fixed cost base, every increase (or decrease) in the gold price will flow directly to the company’s bottom line.”

In spite of Gabelli Value 25 Fund’s optimistic forecast, we are still not convinced, which is why we are going to examine the stock furthermore. 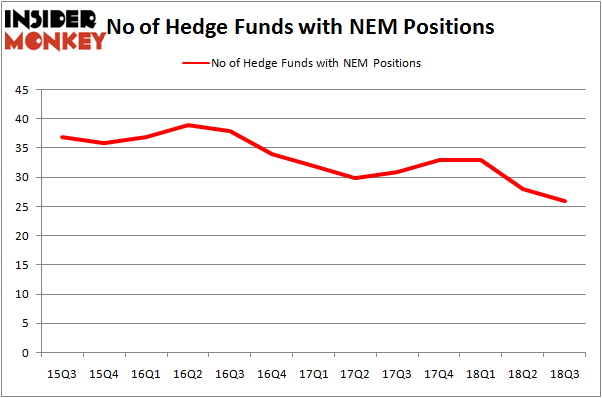 Among these funds, AQR Capital Management held the most valuable stake in Newmont Mining Corp (NYSE:NEM), which was worth $126.1 million at the end of the third quarter. On the second spot was D E Shaw which amassed $86.8 million worth of shares. Moreover, Two Sigma Advisors, Millennium Management, and Citadel Investment Group were also bullish on Newmont Mining Corp (NYSE:NEM), allocating a large percentage of their portfolios to this stock.

Because Newmont Mining Corp (NYSE:NEM) has faced a decline in interest from the smart money, logic holds that there exists a select few hedge funds who were dropping their entire stakes by the end of the third quarter. Intriguingly, Scott Bessent’s Key Square Capital Management sold off the biggest position of the “upper crust” of funds tracked by Insider Monkey, comprising an estimated $36.6 million in call options. Michael Platt and William Reeves’s fund, BlueCrest Capital Mgmt., also dumped its call options, about $28.3 million worth. These transactions are interesting, as total hedge fund interest dropped by 2 funds by the end of the third quarter.

As you can see these stocks had an average of 36 hedge funds with bullish positions and the average amount invested in these stocks was $1.40 billion. That figure was $448 million in NEM’s case. D.R. Horton, Inc. (NYSE:DHI) is the most popular stock in this table. On the other hand Franklin Resources, Inc. (NYSE:BEN) is the least popular one with only 29 bullish hedge fund positions. Compared to these stocks Newmont Mining Corp (NYSE:NEM) is even less popular than BEN. Considering that hedge funds aren’t fond of this stock in relation to other companies analyzed in this article, it may be a good idea to analyze it in detail and understand why the smart money isn’t behind this stock. This isn’t necessarily bad news. Although it is possible that hedge funds may think the stock is overpriced and view the stock as a short candidate, they may not be very familiar with the bullish thesis. In either case more research is warranted.