Before we spend countless hours researching a company, we’d like to analyze what insiders, hedge funds and billionaire investors think of the stock first. We would like to do so because our research has shown that the elite investors’ consensus returns have been exceptional. In the following paragraphs, we find out what the billionaire investors and hedge funds think of New York Community Bancorp, Inc. (NYSE:NYCB).

New York Community Bancorp, Inc. (NYSE:NYCB) has experienced an increase in activity from the world’s largest hedge funds recently. Our calculations also showed that nycb isn’t among the 30 most popular stocks among hedge funds.

Heading into the first quarter of 2019, a total of 15 of the hedge funds tracked by Insider Monkey were long this stock, a change of 25% from one quarter earlier. Below, you can check out the change in hedge fund sentiment towards NYCB over the last 14 quarters. So, let’s examine which hedge funds were among the top holders of the stock and which hedge funds were making big moves. 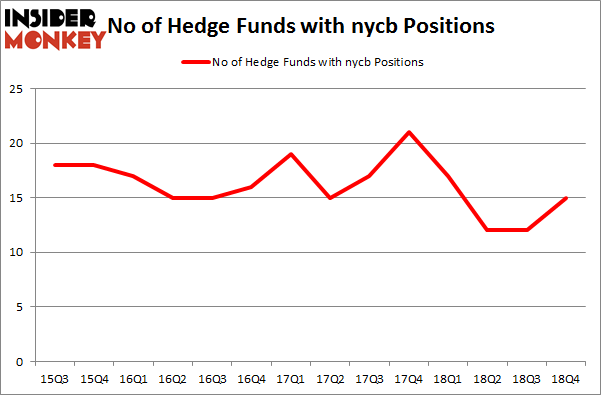 According to publicly available hedge fund and institutional investor holdings data compiled by Insider Monkey, Kahn Brothers, managed by Irving Kahn, holds the most valuable position in New York Community Bancorp, Inc. (NYSE:NYCB). Kahn Brothers has a $40.7 million position in the stock, comprising 7.3% of its 13F portfolio. The second most bullish fund manager is Balyasny Asset Management, led by Dmitry Balyasny, holding a $34.7 million position; the fund has 0.3% of its 13F portfolio invested in the stock. Some other professional money managers that are bullish include Israel Englander’s Millennium Management, Jim Simons’s Renaissance Technologies and Phill Gross and Robert Atchinson’s Adage Capital Management.

As one would reasonably expect, key hedge funds were leading the bulls’ herd. Balyasny Asset Management, managed by Dmitry Balyasny, established the most valuable position in New York Community Bancorp, Inc. (NYSE:NYCB). Balyasny Asset Management had $34.7 million invested in the company at the end of the quarter. Israel Englander’s Millennium Management also made a $17 million investment in the stock during the quarter. The following funds were also among the new NYCB investors: Gregg Moskowitz’s Interval Partners, Chuck Royce’s Royce & Associates, and Ben Levine, Andrew Manuel and Stefan Renold’s LMR Partners.

As you can see these stocks had an average of 19.75 hedge funds with bullish positions and the average amount invested in these stocks was $352 million. That figure was $134 million in NYCB’s case. New Relic Inc (NYSE:NEWR) is the most popular stock in this table. On the other hand BRF S.A. (NYSE:BRFS) is the least popular one with only 9 bullish hedge fund positions. New York Community Bancorp, Inc. (NYSE:NYCB) is not the least popular stock in this group but hedge fund interest is still below average. This is a slightly negative signal and we’d rather spend our time researching stocks that hedge funds are piling on. In this regard NEWR might be a better candidate to consider a long position.