Is Nektar Therapeutics (NKTR) Going To Burn These Hedge Funds ?

Nektar Therapeutics (NASDAQ:NKTR) has seen an increase in support from the world’s most elite money managers recently. Our calculations also showed that NKTR isn’t among the 30 most popular stocks among hedge funds (see the video below). 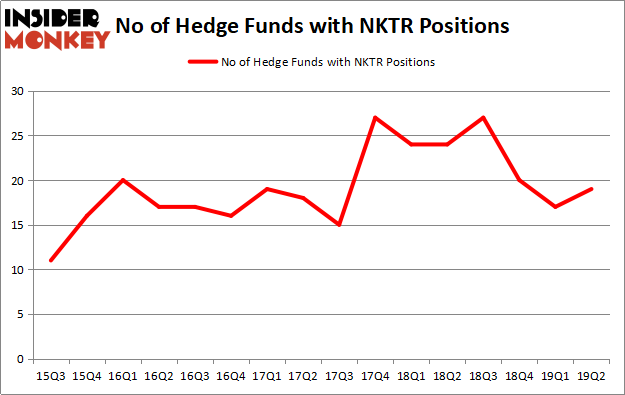 The largest stake in Nektar Therapeutics (NASDAQ:NKTR) was held by Camber Capital Management, which reported holding $89 million worth of stock at the end of March. It was followed by Bridger Management with a $38.6 million position. Other investors bullish on the company included AQR Capital Management, Cormorant Asset Management, and D E Shaw.

Consequently, key hedge funds were breaking ground themselves. PDT Partners, managed by Peter Muller, assembled the most valuable position in Nektar Therapeutics (NASDAQ:NKTR). PDT Partners had $8 million invested in the company at the end of the quarter. John Osterweis’s Osterweis Capital Management also made a $7.8 million investment in the stock during the quarter. The other funds with brand new NKTR positions are Michael Platt and William Reeves’s BlueCrest Capital Mgmt., Roger Ibbotson’s Zebra Capital Management, and Gavin Saitowitz and Cisco J. del Valle’s Springbok Capital.

Let’s check out hedge fund activity in other stocks – not necessarily in the same industry as Nektar Therapeutics (NASDAQ:NKTR) but similarly valued. These stocks are Owens Corning (NYSE:OC), Dr. Reddy’s Laboratories Limited (NYSE:RDY), Gentex Corporation (NASDAQ:GNTX), and Phillips 66 Partners LP (NYSE:PSXP). All of these stocks’ market caps are closest to NKTR’s market cap.

As you can see these stocks had an average of 17.75 hedge funds with bullish positions and the average amount invested in these stocks was $491 million. That figure was $228 million in NKTR’s case. Owens Corning (NYSE:OC) is the most popular stock in this table. On the other hand Phillips 66 Partners LP (NYSE:PSXP) is the least popular one with only 3 bullish hedge fund positions. Nektar Therapeutics (NASDAQ:NKTR) is not the most popular stock in this group but hedge fund interest is still above average. This is a slightly positive signal but we’d rather spend our time researching stocks that hedge funds are piling on. Our calculations showed that top 20 most popular stocks among hedge funds returned 24.4% in 2019 through September 30th and outperformed the S&P 500 ETF (SPY) by 4 percentage points. Unfortunately NKTR wasn’t nearly as popular as these 20 stocks and hedge funds that were betting on NKTR were disappointed as the stock returned -48.8% during the third quarter and underperformed the market. If you are interested in investing in large cap stocks with huge upside potential, you should check out the top 20 most popular stocks among hedge funds as many of these stocks already outperformed the market so far this year.