Does National Retail Properties, Inc. (NYSE:NNN) represent a good buying opportunity at the moment? Let’s quickly check the hedge fund interest towards the company. Hedge fund firms constantly search out bright intellectuals and highly-experienced employees and throw away millions of dollars on satellite photos and other research activities, so it is no wonder why they tend to generate millions in profits each year. It is also true that some hedge fund players fail inconceivably on some occasions, but net net their stock picks have been generating superior risk-adjusted returns on average over the years.

National Retail Properties, Inc. (NYSE:NNN) was in 16 hedge funds’ portfolios at the end of June. NNN shareholders have witnessed an increase in enthusiasm from smart money in recent months. There were 12 hedge funds in our database with NNN positions at the end of the previous quarter. Our calculations also showed that NNN isn’t among the 30 most popular stocks among hedge funds (view the video below).

Unlike some fund managers who are betting on Dow reaching 40000 in a year, our long-short investment strategy doesn’t rely on bull markets to deliver double digit returns. We only rely on hedge fund buy/sell signals. We’re going to review the latest hedge fund action surrounding National Retail Properties, Inc. (NYSE:NNN).

At Q2’s end, a total of 16 of the hedge funds tracked by Insider Monkey were long this stock, a change of 33% from the first quarter of 2019. Below, you can check out the change in hedge fund sentiment towards NNN over the last 16 quarters. With hedgies’ positions undergoing their usual ebb and flow, there exists an “upper tier” of notable hedge fund managers who were adding to their stakes significantly (or already accumulated large positions). 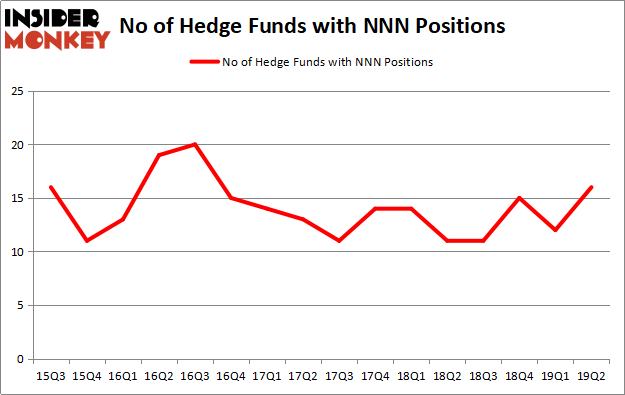 The largest stake in National Retail Properties, Inc. (NYSE:NNN) was held by AEW Capital Management, which reported holding $95 million worth of stock at the end of March. It was followed by Zimmer Partners with a $53 million position. Other investors bullish on the company included Millennium Management, Citadel Investment Group, and Echo Street Capital Management.

With a general bullishness amongst the heavyweights, some big names have jumped into National Retail Properties, Inc. (NYSE:NNN) headfirst. Echo Street Capital Management, managed by Greg Poole, initiated the largest position in National Retail Properties, Inc. (NYSE:NNN). Echo Street Capital Management had $9 million invested in the company at the end of the quarter. Matthew Tewksbury’s Stevens Capital Management also made a $4.4 million investment in the stock during the quarter. The other funds with new positions in the stock are Ray Dalio’s Bridgewater Associates, Paul Tudor Jones’s Tudor Investment Corp, and Michael Platt and William Reeves’s BlueCrest Capital Mgmt..

Let’s now take a look at hedge fund activity in other stocks – not necessarily in the same industry as National Retail Properties, Inc. (NYSE:NNN) but similarly valued. We will take a look at OGE Energy Corp. (NYSE:OGE), Westlake Chemical Corporation (NYSE:WLK), SEI Investments Company (NASDAQ:SEIC), and Formula One Group (NASDAQ:FWONK). All of these stocks’ market caps resemble NNN’s market cap.

As you can see these stocks had an average of 22.5 hedge funds with bullish positions and the average amount invested in these stocks was $652 million. That figure was $217 million in NNN’s case. Formula One Group (NASDAQ:FWONK) is the most popular stock in this table. On the other hand OGE Energy Corp. (NYSE:OGE) is the least popular one with only 13 bullish hedge fund positions. National Retail Properties, Inc. (NYSE:NNN) is not the least popular stock in this group but hedge fund interest is still below average. Our calculations showed that top 20 most popular stocks among hedge funds returned 24.4% in 2019 through September 30th and outperformed the S&P 500 ETF (SPY) by 4 percentage points. A small number of hedge funds were also right about betting on NNN as the stock returned 7.4% during the same time frame and outperformed the market by an even larger margin.