The Insider Monkey team has completed processing the quarterly 13F filings for the September quarter submitted by the hedge funds and other money managers included in our extensive database. Most hedge fund investors experienced strong gains on the back of a strong market performance, which certainly propelled them to adjust their equity holdings so as to maintain the desired risk profile. As a result, the relevancy of these public filings and their content is indisputable, as they may reveal numerous high-potential stocks. The following article will discuss the smart money sentiment towards National Fuel Gas Company (NYSE:NFG).

Is National Fuel Gas Company (NYSE:NFG) the right pick for your portfolio? Hedge funds are selling. The number of long hedge fund positions retreated by 2 in recent months. Our calculations also showed that NFG isn’t among the 30 most popular stocks among hedge funds (click for Q3 rankings and see the video below for Q2 rankings). NFG was in 20 hedge funds’ portfolios at the end of September. There were 22 hedge funds in our database with NFG holdings at the end of the previous quarter.

To the average investor there are a multitude of gauges market participants use to analyze stocks. Some of the most underrated gauges are hedge fund and insider trading indicators. Our experts have shown that, historically, those who follow the best picks of the best hedge fund managers can trounce their index-focused peers by a significant margin (see the details here).

Unlike the largest US hedge funds that are convinced Dow will soar past 40,000 or the world’s most bearish hedge fund that’s more convinced than ever that a crash is coming, our long-short investment strategy doesn’t rely on bull or bear markets to deliver double digit returns. We only rely on the best performing hedge funds‘ buy/sell signals. Let’s take a peek at the fresh hedge fund action surrounding National Fuel Gas Company (NYSE:NFG).

Heading into the fourth quarter of 2019, a total of 20 of the hedge funds tracked by Insider Monkey held long positions in this stock, a change of -9% from one quarter earlier. Below, you can check out the change in hedge fund sentiment towards NFG over the last 17 quarters. With the smart money’s sentiment swirling, there exists a few key hedge fund managers who were upping their holdings meaningfully (or already accumulated large positions). 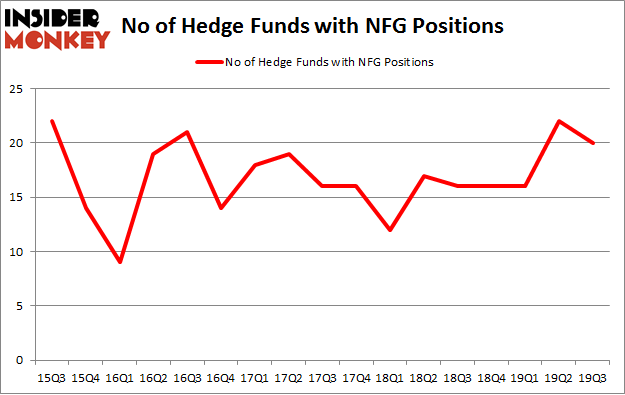 According to publicly available hedge fund and institutional investor holdings data compiled by Insider Monkey, GAMCO Investors, managed by Mario Gabelli, holds the biggest position in National Fuel Gas Company (NYSE:NFG). GAMCO Investors has a $99.1 million position in the stock, comprising 0.8% of its 13F portfolio. The second largest stake is held by Winton Capital Management, managed by David Harding, which holds a $25 million position; the fund has 0.3% of its 13F portfolio invested in the stock. Some other hedge funds and institutional investors that are bullish comprise Noam Gottesman’s GLG Partners, Ken Griffin’s Citadel Investment Group and Israel Englander’s Millennium Management. In terms of the portfolio weights assigned to each position Private Capital Management allocated the biggest weight to National Fuel Gas Company (NYSE:NFG), around 1.95% of its 13F portfolio. GAMCO Investors is also relatively very bullish on the stock, setting aside 0.83 percent of its 13F equity portfolio to NFG.

Due to the fact that National Fuel Gas Company (NYSE:NFG) has witnessed falling interest from hedge fund managers, logic holds that there was a specific group of hedge funds that slashed their entire stakes heading into Q4. It’s worth mentioning that Renaissance Technologies dumped the biggest investment of the 750 funds monitored by Insider Monkey, worth close to $5.1 million in call options, and Ken Griffin’s Citadel Investment Group was right behind this move, as the fund sold off about $1.4 million worth. These moves are important to note, as aggregate hedge fund interest was cut by 2 funds heading into Q4.

As you can see these stocks had an average of 18 hedge funds with bullish positions and the average amount invested in these stocks was $165 million. That figure was $212 million in NFG’s case. Carter’s, Inc. (NYSE:CRI) is the most popular stock in this table. On the other hand Cushman & Wakefield plc (NYSE:CWK) is the least popular one with only 10 bullish hedge fund positions. National Fuel Gas Company (NYSE:NFG) is not the most popular stock in this group but hedge fund interest is still above average. This is a slightly positive signal but we’d rather spend our time researching stocks that hedge funds are piling on. Our calculations showed that top 20 most popular stocks among hedge funds returned 37.4% in 2019 through the end of November and outperformed the S&P 500 ETF (SPY) by 9.9 percentage points. Unfortunately NFG wasn’t nearly as popular as these 20 stocks and hedge funds that were betting on NFG were disappointed as the stock returned -4% during the fourth quarter (through the end of November) and underperformed the market. If you are interested in investing in large cap stocks with huge upside potential, you should check out the top 20 most popular stocks among hedge funds as many of these stocks already outperformed the market so far this year.