Russell 2000 ETF (IWM) lagged the larger S&P 500 ETF (SPY) by more than 10 percentage points since the end of the third quarter of 2018 as investors first worried over the possible ramifications of rising interest rates and the escalation of the trade war with China. The hedge funds and institutional investors we track typically invest more in smaller-cap stocks than an average investor (i.e. only about 60% S&P 500 constituents were among the 500 most popular stocks among hedge funds), and we have seen data that shows those funds paring back their overall exposure. Those funds cutting positions in small-caps is one reason why volatility has increased. In the following paragraphs, we take a closer look at what hedge funds and prominent investors think of National Energy Services Reunited Corp. (NASDAQ:NESR) and see how the stock is affected by the recent hedge fund activity.

National Energy Services Reunited Corp. (NASDAQ:NESR) has experienced a decrease in enthusiasm from smart money in recent months. NESR was in 7 hedge funds’ portfolios at the end of the second quarter of 2019. There were 8 hedge funds in our database with NESR positions at the end of the previous quarter. Our calculations also showed that NESR isn’t among the 30 most popular stocks among hedge funds (see the video below).

In the eyes of most stock holders, hedge funds are assumed to be underperforming, outdated financial tools of years past. While there are over 8000 funds with their doors open at present, Our researchers look at the upper echelon of this group, about 750 funds. Most estimates calculate that this group of people orchestrate bulk of the hedge fund industry’s total capital, and by keeping track of their highest performing stock picks, Insider Monkey has figured out a few investment strategies that have historically outstripped the broader indices. Insider Monkey’s flagship hedge fund strategy beat the S&P 500 index by around 5 percentage points a year since its inception in May 2014. We were able to generate large returns even by identifying short candidates. Our portfolio of short stocks lost 25.7% since February 2017 (through September 30th) even though the market was up more than 33% during the same period. We just shared a list of 10 short targets in our latest quarterly update . 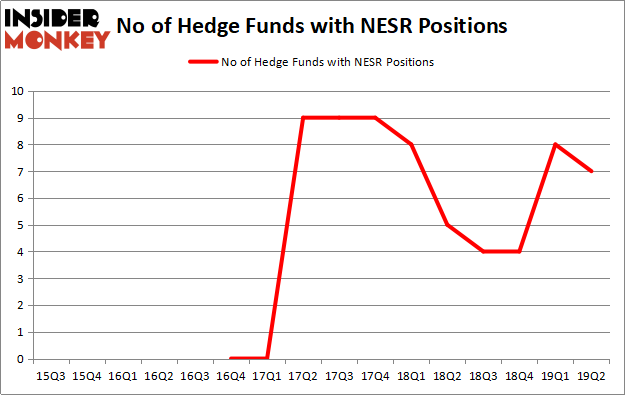 Among these funds, Encompass Capital Advisors held the most valuable stake in National Energy Services Reunited Corp. (NASDAQ:NESR), which was worth $23.2 million at the end of the second quarter. On the second spot was SIR Capital Management which amassed $1.3 million worth of shares. Moreover, GeoSphere Capital Management, Springbok Capital, and 683 Capital Partners were also bullish on National Energy Services Reunited Corp. (NASDAQ:NESR), allocating a large percentage of their portfolios to this stock.

Seeing as National Energy Services Reunited Corp. (NASDAQ:NESR) has experienced a decline in interest from hedge fund managers, logic holds that there is a sect of money managers that slashed their positions entirely in the second quarter. At the top of the heap, Israel Englander’s Millennium Management sold off the biggest stake of the “upper crust” of funds monitored by Insider Monkey, valued at close to $2.6 million in stock, and Steve Pattyn’s Yaupon Capital was right behind this move, as the fund cut about $1.5 million worth. These transactions are important to note, as aggregate hedge fund interest fell by 1 funds in the second quarter.

As you can see these stocks had an average of 15.75 hedge funds with bullish positions and the average amount invested in these stocks was $100 million. That figure was $27 million in NESR’s case. Modine Manufacturing Company (NYSE:MOD) is the most popular stock in this table. On the other hand ADTRAN, Inc. (NASDAQ:ADTN) is the least popular one with only 13 bullish hedge fund positions. Compared to these stocks National Energy Services Reunited Corp. (NASDAQ:NESR) is even less popular than ADTN. Hedge funds dodged a bullet by taking a bearish stance towards NESR. Our calculations showed that the top 20 most popular hedge fund stocks returned 24.4% in 2019 through September 30th and outperformed the S&P 500 ETF (SPY) by 4 percentage points. Unfortunately NESR wasn’t nearly as popular as these 20 stocks (hedge fund sentiment was very bearish); NESR investors were disappointed as the stock returned -23.2% during the third quarter and underperformed the market. If you are interested in investing in large cap stocks with huge upside potential, you should check out the top 20 most popular stocks among hedge funds as many of these stocks already outperformed the market so far in 2019.

Were Hedge Funds Right About Snapping Up Nordstrom, Inc. (JWN)?
Monthly Newsletter Strategy
Download a free copy of our newsletter and see the details inside!
Hedge Fund Resource Center
Related News
Is National Energy Services Reunited Corp. (NESR) A Good Stock To Buy ? 11 Largest Auto Insurance Companies In The US In 2019 10 Poorest Cities in America in 2019 8 Lowest Tar and Nicotine Cigarette Brands in 2019
Billionaire Hedge Funds