Is National CineMedia, Inc. (NCMI) A Good Stock To Buy?

Before we spend countless hours researching a company, we’d like to analyze what insiders, hedge funds and billionaire investors think of the stock first. We would like to do so because our research has shown that the elite investors’ consensus returns have been exceptional. In the following paragraphs, we find out what the billionaire investors and hedge funds think of National CineMedia, Inc. (NASDAQ:NCMI).

National CineMedia, Inc. (NASDAQ:NCMI) was in 19 hedge funds’ portfolios at the end of December. NCMI investors should pay attention to an increase in hedge fund sentiment of late. There were 15 hedge funds in our database with NCMI holdings at the end of the previous quarter. Our calculations also showed that ncmi isn’t among the 30 most popular stocks among hedge funds.

What have hedge funds been doing with National CineMedia, Inc. (NASDAQ:NCMI)? 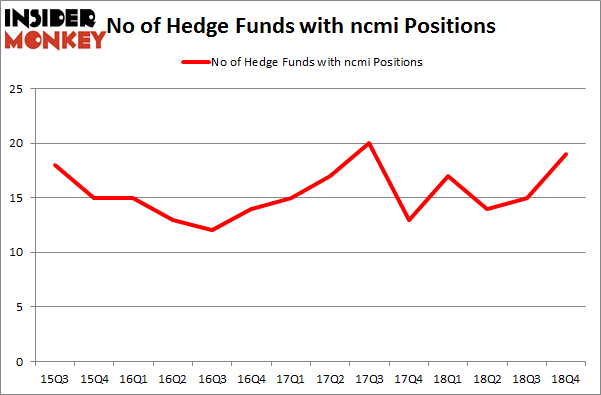 More specifically, Greenhouse Funds was the largest shareholder of National CineMedia, Inc. (NASDAQ:NCMI), with a stake worth $15.1 million reported as of the end of December. Trailing Greenhouse Funds was Renaissance Technologies, which amassed a stake valued at $5.7 million. Citadel Investment Group, Two Sigma Advisors, and Blue Mountain Capital were also very fond of the stock, giving the stock large weights in their portfolios.