Is Mueller Industries, Inc. (MLI) A Good Stock for Your Portfolio?

Market volatility has picked up again over the past few weeks. Headlines highlight risks regarding interest rates, the Fed, China, house prices, auto sales, trade wars, and more. Uncertainty abounds. But doesn’t it always? I have no view on whether the recent volatility will continue for a while, or whether the market will be back at all-time highs before we know it. I remain focused on preserving and growing our capital, and continue to believe that the best way to do so is via a value-driven, concentrated, patient approach. I shun consensus holdings, rich valuations, and market fads, in favor of solid, yet frequently off-the-beaten-path, businesses run by excellent, aligned management teams, purchased at deep discounts to intrinsic value,” are the words of Maran Capital’s Dan Roller. His stock picks have been beating the S&P 500 Index handily. We pay attention to what hedge funds are doing in a particular stock before considering a potential investment because it works for us. So let’s take a glance at the smart money sentiment towards Mueller Industries, Inc. (NYSE:MLI) and see how it was affected.

Mueller Industries, Inc. (NYSE:MLI) shareholders have witnessed a decrease in hedge fund interest of late. 8 of the hedge funds tracked by Insider Monkey owned over $200 million worth of Mueller’s stock on June 30. That was down from 9 funds at the end of March, though the value of their holdings was up by $30 million. Also of note is the fact that insiders have begun buying shares of the company, including a purchase of shares indirectly owned by Chairman and CEO Gregory L. Christopher. That landed Mueller on our list of The 25 Biggest Insider Purchases in October.

According to most stock holders, hedge funds are assumed to be underperforming, old investment vehicles of the past. While there are over 8,000 funds trading today, our experts choose to focus on the aristocrats of this group, about 700 funds. It is estimated that this group of investors watch over the lion’s share of the hedge fund industry’s total asset base, and by watching their inimitable investments, Insider Monkey has revealed a number of investment strategies that have historically outrun the S&P 500 index. Insider Monkey’s small-cap hedge fund strategy outstripped the S&P 500 index by 12 percentage points per year for a decade in our back tests.

Heading into the fourth quarter of 2018, a total of 8 of the hedge funds tracked by Insider Monkey were bullish on this stock, an 11% drop from the previous quarter. By comparison, 12 hedge funds held shares or bullish call options in MLI heading into this year. With hedge funds’ capital changing hands, there exists an “upper tier” of key hedge fund managers who were upping their stakes substantially (or already accumulated large positions). 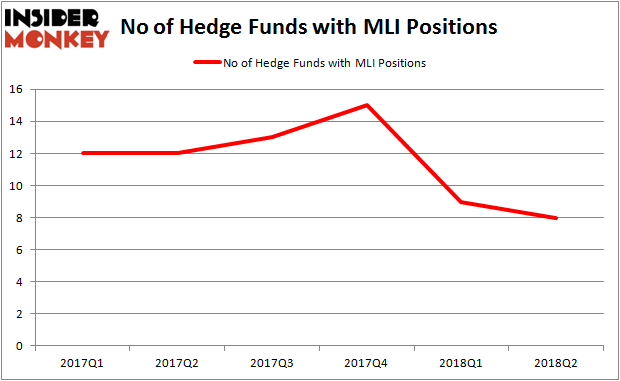 According to publicly available hedge fund and institutional investor holdings data compiled by Insider Monkey, GAMCO Investors, managed by Mario Gabelli, holds the number one position in Mueller Industries, Inc. (NYSE:MLI). GAMCO Investors has a $128.5 million position in the stock, comprising 0.9% of its 13F portfolio. The second-largest stake is held by Fisher Asset Management, led by Ken Fisher, holding a $34.1 million position; the fund has less than 0.1% of its 13F portfolio invested in the stock. Remaining peers that are bullish include Roger Ibbotson’s Zebra Capital Management, Chuck Royce’s Royce & Associates and Louis Navellier’s Navellier & Associates.

Because Mueller Industries, Inc. (NYSE:MLI) has witnessed a decline in interest from the smart money, it’s easy to see that there is a sect of hedge funds that decided to sell off their positions entirely by the end of the second quarter. Intriguingly, Matthew Hulsizer’s PEAK6 Capital Management dumped the largest stake of all the hedgies watched by Insider Monkey, worth close to $0.1 million in stock.

As you can see these stocks had an average of 15 hedge funds with bullish positions and the average amount invested in these stocks was $134 million. That figure was $200 million in MLI’s case. Greenbrier Companies Inc (NYSE:GBX) is the most popular stock in this table. On the other hand Bitauto Hldg Ltd (ADR) (NYSE:BITA) is the least popular one with only 5 bullish hedge fund positions. Mueller Industries, Inc. (NYSE:MLI) is not the least popular stock in this group but hedge fund interest is still below average. This is a slightly negative signal, but it’s outweighed by the fact that there is more money invested in it than in its peers, in addition to recent insider buying activity. As such, we recommend taking a closer look at Mueller.