Is MSA Safety Incorporated (MSA) A Good Stock To Buy?

Is MSA Safety Incorporated (NYSE:MSA) undervalued? Hedge funds are turning bullish. The number of long hedge fund positions inched up by 7 lately. Our calculations also showed that MSA isn’t among the 30 most popular stocks among hedge funds.

At the end of the fourth quarter, a total of 17 of the hedge funds tracked by Insider Monkey were long this stock, a change of 70% from one quarter earlier. Below, you can check out the change in hedge fund sentiment towards MSA over the last 14 quarters. So, let’s examine which hedge funds were among the top holders of the stock and which hedge funds were making big moves. 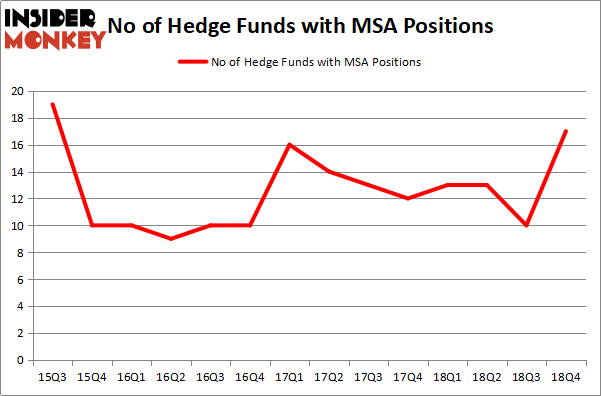 The largest stake in MSA Safety Incorporated (NYSE:MSA) was held by AQR Capital Management, which reported holding $24.4 million worth of stock at the end of September. It was followed by Select Equity Group with a $19.5 million position. Other investors bullish on the company included Royce & Associates, Winton Capital Management, and PDT Partners.

As one would reasonably expect, some big names were leading the bulls’ herd. Driehaus Capital, managed by Richard Driehaus, assembled the largest position in MSA Safety Incorporated (NYSE:MSA). Driehaus Capital had $1.5 million invested in the company at the end of the quarter. Joel Greenblatt’s Gotham Asset Management also initiated a $1.4 million position during the quarter. The following funds were also among the new MSA investors: Matthew Tewksbury’s Stevens Capital Management, Israel Englander’s Millennium Management, and Andrew Feldstein and Stephen Siderow’s Blue Mountain Capital.

As you can see these stocks had an average of 23.75 hedge funds with bullish positions and the average amount invested in these stocks was $313 million. That figure was $79 million in MSA’s case. Skechers USA Inc (NYSE:SKX) is the most popular stock in this table. On the other hand Vipshop Holdings Limited (NYSE:VIPS) is the least popular one with only 22 bullish hedge fund positions. Compared to these stocks MSA Safety Incorporated (NYSE:MSA) is even less popular than VIPS. Hedge funds dodged a bullet by taking a bearish stance towards MSA. Our calculations showed that the top 15 most popular hedge fund stocks returned 24.2% through April 22nd and outperformed the S&P 500 ETF (SPY) by more than 7 percentage points. Unfortunately MSA wasn’t nearly as popular as these 15 stock (hedge fund sentiment was very bearish); MSA investors were disappointed as the stock returned 11.6% and underperformed the market. If you are interested in investing in large cap stocks with huge upside potential, you should check out the top 15 most popular stocks) among hedge funds as 13 of these stocks already outperformed the market this year.