Monster Beverage Corp (NASDAQ:MNST) saw its stock pop 9% after announcing it would change the wording on its energy drinks. The move was due to pressure relief related to issues surrounding health concerns and energy drinks. So is this a sign that the regulatory concerns that have kept the stock under pressure be over exaggerated?

The stock has fallen from its mid-2012 high of nearly $80, to now trade around $50 per share. This comes after the company was hit with concerns over slowing growth, and shares took a huge hit in October 2012 when news broke of a potential lawsuit against the company for the death of a teenager. 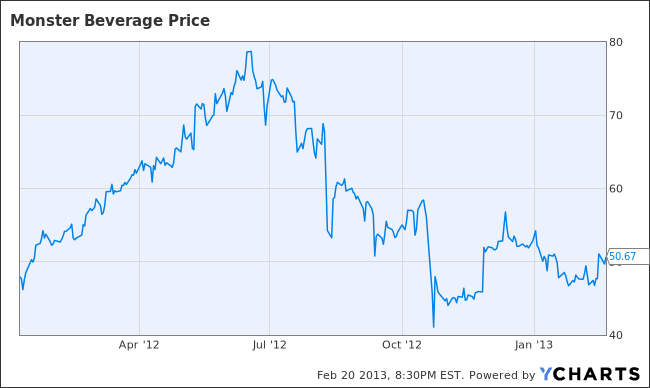 There is still overhang on the stock, related to the FDA’s investigation on whether energy drinks can be dangerous to teens and people with heart problems, but I feel the pressure has been done (read about why Monster is a takeover target). Monster recently announced plans that will involve using federal guidelines for its products, which involves listing “nutrition facts” instead of “supplement facts” on their projects. Although this does not mean the company is ‘home-free,’ it is a step in the right direction and should help protect the company against future lawsuits.

Monster’s energy drinks is the company’s top segment and accounts for over 90% of revenues. The energy market is rather robust, where total U.S. sales of alternative beverages is estimated to be $32 billion, according to Beverage Marketing Corporation. As far as market share is concerned, in dollars, Red Bull is the leader, but in volume Monster is the leader. The market share shapes up as follows:

Monster has a solid position near the top of the energy drink industry, but how does the competition stack up? Other major competitors in the beverage industry includes PepsiCo, Inc. (NYSE:PEP), The Coca-Cola Company (NYSE:KO), Starbucks Corporation (NASDAQ:SBUX) and Dr. Pepper Snapple Group Inc. (NYSE:DPS). While Red Bull and Rockstar are both private brands, major beverage companies Pepsi and Coke have a hand in the energy drink market. Pepsi has its AMP drink and Coke has Full Throttle.

Pepsi recently announced 4Q results that showed EPS of $1.09 that was in line with management’s target, but down 5% from the same quarter a year ago. As far as caveats for Pepsi investors, the company has seen slowing North American sales, this despite increased marketing focused in the area. Coca-Cola is the leader in the U.S., as far as market share for carbonated drinks, and posted 4Q results that included EPS of $0.45, up 15% from the same quarter last year. However, opportunities could be afoot for Pepsi, given Coca-Cola has been lowering its advertising spending. Ad spending as a percent of sales has been in decline since 2006.

Dr. Pepper is also in the energy drink market, although having only a small presence with its Venom drink. Dr. Pepper posted 4Q results that included EPS of $0.82, which was a decline of 2.4% year-over-year. Dr. Pepper’s problems lie in the fact that the company operates in the U.S., Canada and Mexico, with little to no international exposure, putting Dr. Pepper at a disadvantage to other beverage companies. Even with a sole focus on North America, Dr. Pepper still does not stack up to Pepsi and Coca-Cola, which together make up over 60% of the U.S. liquid beverages market in terms of volume.