Is Microchip Technology Incorporated (MCHP) A Good Stock To Buy?

We at Insider Monkey have gone over 700 13F filings that hedge funds and prominent investors are required to file by the SEC. The 13F filings show the funds’ and investors’ portfolio positions as of September 30th. In this article we look at what those investors think of Microchip Technology Incorporated (NASDAQ:MCHP).

Microchip Technology Incorporated (NASDAQ:MCHP) investors should pay attention to a decrease in hedge fund interest lately. MCHP was in 23 hedge funds’ portfolios at the end of September. There were 30 hedge funds in our database with MCHP positions at the end of the previous quarter. Our calculations also showed that MCHP isn’t among the 30 most popular stocks among hedge funds.

According to most shareholders, hedge funds are viewed as worthless, outdated financial tools of yesteryear. While there are greater than 8000 funds in operation at the moment, Our experts choose to focus on the elite of this group, around 700 funds. It is estimated that this group of investors manage the lion’s share of all hedge funds’ total asset base, and by keeping an eye on their inimitable picks, Insider Monkey has come up with various investment strategies that have historically outpaced the market. Insider Monkey’s flagship hedge fund strategy defeated the S&P 500 index by 6 percentage points annually since its inception in May 2014 through early November 2018. We were able to generate large returns even by identifying short candidates. Our portfolio of short stocks lost 24% since February 2017 (through December 3rd) even though the market was up nearly 23% during the same period. We just shared a list of 11 short targets in our latest quarterly update.

At the end of the third quarter, a total of 23 of the hedge funds tracked by Insider Monkey were bullish on this stock, a change of -23% from the previous quarter. The graph below displays the number of hedge funds with bullish position in MCHP over the last 13 quarters. With hedgies’ sentiment swirling, there exists a few notable hedge fund managers who were increasing their stakes meaningfully (or already accumulated large positions). 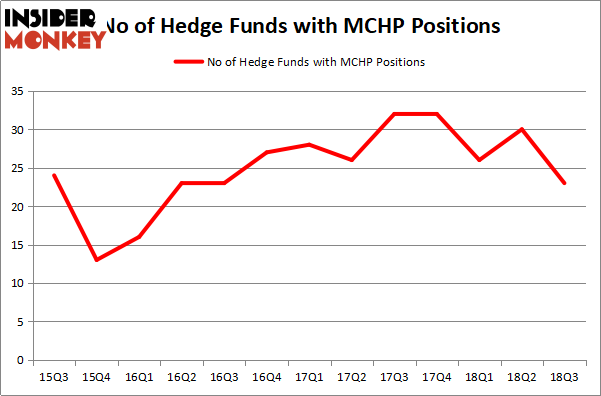 According to Insider Monkey’s hedge fund database, Ken Griffin’s Citadel Investment Group has the number one position in Microchip Technology Incorporated (NASDAQ:MCHP), worth close to $435.6 million, corresponding to 0.2% of its total 13F portfolio. Sitting at the No. 2 spot is Alkeon Capital Management, managed by Panayotis Takis Sparaggis, which holds a $121 million position; 0.6% of its 13F portfolio is allocated to the stock. Other hedge funds and institutional investors with similar optimism encompass Kerr Neilson’s Platinum Asset Management, David Blood and Al Gore’s Generation Investment Management and Dmitry Balyasny’s Balyasny Asset Management.

Since Microchip Technology Incorporated (NASDAQ:MCHP) has experienced falling interest from hedge fund managers, logic holds that there lies a certain “tier” of hedge funds that elected to cut their full holdings last quarter. It’s worth mentioning that Robert Henry Lynch’s Aristeia Capital sold off the biggest stake of the “upper crust” of funds followed by Insider Monkey, totaling close to $42 million in stock, and Steve Cohen’s Point72 Asset Management was right behind this move, as the fund dropped about $34 million worth. These transactions are interesting, as total hedge fund interest was cut by 7 funds last quarter.

As you can see these stocks had an average of 27.25 hedge funds with bullish positions and the average amount invested in these stocks was $1373 million. That figure was $886 million in MCHP’s case. CA, Inc. (NASDAQ:CA) is the most popular stock in this table. On the other hand WPP plc (NYSE:WPP) is the least popular one with only 8 bullish hedge fund positions. Microchip Technology Incorporated (NASDAQ:MCHP) is not the least popular stock in this group but hedge fund interest is still below average. This is a slightly negative signal and we’d rather spend our time researching stocks that hedge funds are piling on. In this regard CA might be a better candidate to consider a long position.