MGM Resorts International (NYSE:MGM) has experienced a decrease in activity from the world’s largest hedge funds lately. MGM was in 49 hedge funds’ portfolios at the end of the third quarter of 2018. There were 51 hedge funds in our database with MGM positions at the end of the previous quarter. Our calculations also showed that MGM isn’t among the 30 most popular stocks among hedge funds.

Heading into the fourth quarter of 2018, a total of 49 of the hedge funds tracked by Insider Monkey held long positions in this stock, a change of -4% from the previous quarter. By comparison, 67 hedge funds held shares or bullish call options in MGM heading into this year. With hedge funds’ sentiment swirling, there exists a few noteworthy hedge fund managers who were boosting their holdings significantly (or already accumulated large positions). 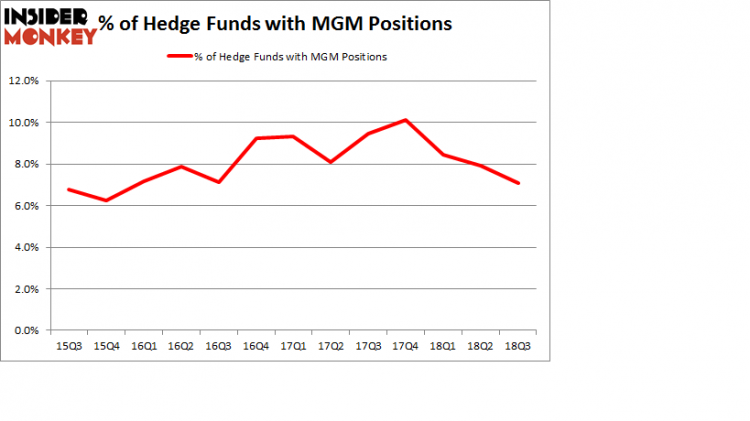 Due to the fact that MGM Resorts International (NYSE:MGM) has experienced falling interest from the entirety of the hedge funds we track, it’s safe to say that there is a sect of funds that decided to sell off their entire stakes by the end of the third quarter. Interestingly, Eric W. Mandelblatt and Gaurav Kapadia’s Soroban Capital Partners cut the biggest stake of the 700 funds followed by Insider Monkey, worth close to $361.6 million in stock, and Ricky Sandler’s Eminence Capital was right behind this move, as the fund dumped about $262.2 million worth. These transactions are important to note, as total hedge fund interest dropped by 2 funds by the end of the third quarter.

As you can see these stocks had an average of 28.75 hedge funds with bullish positions and the average amount invested in these stocks was $2.01 trillion. That figure was $2.01 billion in MGM’s case. Restaurant Brands International Inc (NYSE:QSR) is the most popular stock in this table. On the other hand Waters Corporation (NYSE:WAT) is the least popular one with only 23 bullish hedge fund positions. Compared to these stocks MGM Resorts International (NYSE:MGM) is more popular among hedge funds. Considering that hedge funds are fond of this stock in relation to its market cap peers, it may be a good idea to analyze it in detail and potentially include it in your portfolio.