Is Medpace Holdings, Inc. (MEDP) A Good Stock To Buy?

Investing in small cap stocks has historically been a way to outperform the market, as small cap companies typically grow faster on average than the blue chips. That outperformance comes with a price, however, as there are occasional periods of higher volatility. The fourth quarter of 2018 is one of those periods, as the Russell 2000 ETF (IWM) has underperformed the larger S&P 500 ETF (SPY) by nearly 7 percentage points. Given that the funds we track tend to have a disproportionate amount of their portfolios in smaller cap stocks, they have seen some volatility in their portfolios too. Actually their moves are potentially one of the factors that contributed to this volatility. In this article, we use our extensive database of hedge fund holdings to find out what the smart money thinks of Medpace Holdings, Inc. (NASDAQ:MEDP).

Is Medpace Holdings, Inc. (NASDAQ:MEDP) a superb investment right now? The smart money is becoming less confident. The number of bullish hedge fund bets were cut by 3 in recent months. Our calculations also showed that medp isn’t among the 30 most popular stocks among hedge funds. MEDP was in 23 hedge funds’ portfolios at the end of the fourth quarter of 2018. There were 26 hedge funds in our database with MEDP holdings at the end of the previous quarter.

Heading into the first quarter of 2019, a total of 23 of the hedge funds tracked by Insider Monkey were bullish on this stock, a change of -12% from the previous quarter. The graph below displays the number of hedge funds with bullish position in MEDP over the last 14 quarters. So, let’s check out which hedge funds were among the top holders of the stock and which hedge funds were making big moves. 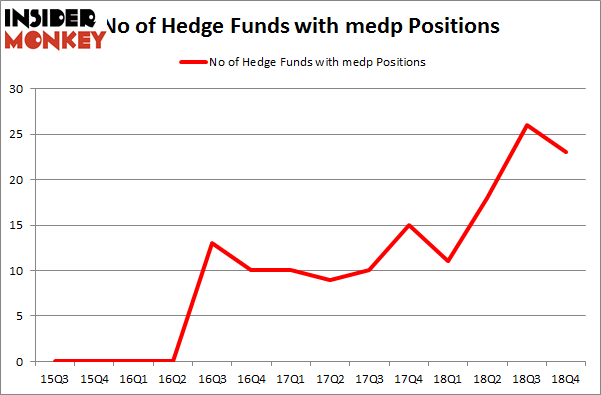 When looking at the institutional investors followed by Insider Monkey, Jim Simons’s Renaissance Technologies has the biggest position in Medpace Holdings, Inc. (NASDAQ:MEDP), worth close to $25.9 million, comprising less than 0.1%% of its total 13F portfolio. The second most bullish fund manager is AQR Capital Management, led by Cliff Asness, holding a $23.6 million position; less than 0.1%% of its 13F portfolio is allocated to the company. Remaining members of the smart money with similar optimism include John Overdeck and David Siegel’s Two Sigma Advisors, D. E. Shaw’s D E Shaw and Noam Gottesman’s GLG Partners.

Due to the fact that Medpace Holdings, Inc. (NASDAQ:MEDP) has witnessed declining sentiment from the aggregate hedge fund industry, logic holds that there was a specific group of hedgies who sold off their full holdings last quarter. Intriguingly, Peter Algert and Kevin Coldiron’s Algert Coldiron Investors cut the biggest stake of all the hedgies tracked by Insider Monkey, totaling an estimated $1.8 million in stock, and Paul Tudor Jones’s Tudor Investment Corp was right behind this move, as the fund dumped about $1.6 million worth. These bearish behaviors are important to note, as aggregate hedge fund interest fell by 3 funds last quarter.

Let’s check out hedge fund activity in other stocks – not necessarily in the same industry as Medpace Holdings, Inc. (NASDAQ:MEDP) but similarly valued. These stocks are Commercial Metals Company (NYSE:CMC), Brooks Automation, Inc. (NASDAQ:BRKS), Wingstop Inc (NASDAQ:WING), and First Bancorp (NYSE:FBP). All of these stocks’ market caps are closest to MEDP’s market cap.