Is Mednax Inc. (MD) Going To Burn These Hedge Funds ?

Mednax Inc. (NYSE:MD) investors should pay attention to a decrease in activity from the world’s largest hedge funds of late. MD was in 18 hedge funds’ portfolios at the end of June. There were 23 hedge funds in our database with MD holdings at the end of the previous quarter. Our calculations also showed that MD isn’t among the 30 most popular stocks among hedge funds (see the video below).

Unlike former hedge manager, Dr. Steve Sjuggerud, who is convinced Dow will soar past 40000, our long-short investment strategy doesn’t rely on bull markets to deliver double digit returns. We only rely on hedge fund buy/sell signals. Let’s take a glance at the recent hedge fund action regarding Mednax Inc. (NYSE:MD).

At the end of the second quarter, a total of 18 of the hedge funds tracked by Insider Monkey were bullish on this stock, a change of -22% from the previous quarter. Below, you can check out the change in hedge fund sentiment towards MD over the last 16 quarters. With hedge funds’ capital changing hands, there exists a select group of key hedge fund managers who were increasing their stakes significantly (or already accumulated large positions). 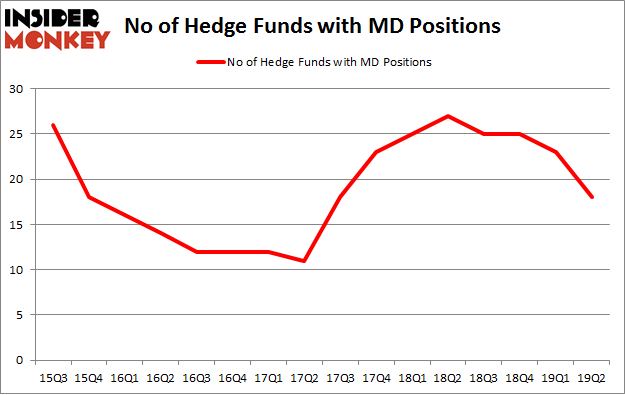 Among these funds, D E Shaw held the most valuable stake in Mednax Inc. (NYSE:MD), which was worth $75.7 million at the end of the second quarter. On the second spot was P2 Capital Partners which amassed $69.4 million worth of shares. Moreover, AQR Capital Management, Winton Capital Management, and Renaissance Technologies were also bullish on Mednax Inc. (NYSE:MD), allocating a large percentage of their portfolios to this stock.

Because Mednax Inc. (NYSE:MD) has witnessed falling interest from hedge fund managers, it’s safe to say that there lies a certain “tier” of hedgies that elected to cut their positions entirely heading into Q3. It’s worth mentioning that Richard S. Pzena’s Pzena Investment Management dropped the biggest stake of the “upper crust” of funds monitored by Insider Monkey, valued at an estimated $62.2 million in stock, and Clifton S. Robbins’s Blue Harbour Group was right behind this move, as the fund dropped about $37.6 million worth. These transactions are important to note, as aggregate hedge fund interest dropped by 5 funds heading into Q3.