Mednax Inc. (NYSE:MD) was in 23 hedge funds’ portfolios at the end of March. MD investors should pay attention to a decrease in hedge fund interest lately. There were 25 hedge funds in our database with MD holdings at the end of the previous quarter. Our calculations also showed that md isn’t among the 30 most popular stocks among hedge funds.

Heading into the second quarter of 2019, a total of 23 of the hedge funds tracked by Insider Monkey were bullish on this stock, a change of -8% from the previous quarter. On the other hand, there were a total of 25 hedge funds with a bullish position in MD a year ago. With the smart money’s sentiment swirling, there exists a few notable hedge fund managers who were boosting their stakes substantially (or already accumulated large positions). 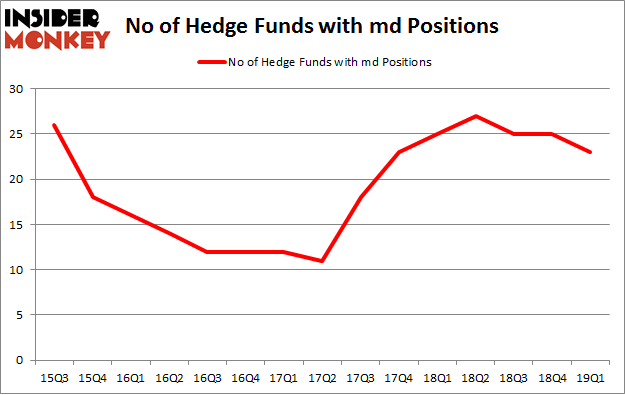 The largest stake in Mednax Inc. (NYSE:MD) was held by D E Shaw, which reported holding $67.6 million worth of stock at the end of March. It was followed by Pzena Investment Management with a $62.2 million position. Other investors bullish on the company included P2 Capital Partners, Blue Harbour Group, and AQR Capital Management.

Because Mednax Inc. (NYSE:MD) has faced falling interest from the aggregate hedge fund industry, it’s safe to say that there is a sect of fund managers that decided to sell off their full holdings heading into Q3. Intriguingly, Paul Singer’s Elliott Management sold off the largest investment of all the hedgies tracked by Insider Monkey, worth about $56 million in stock. Andrew Feldstein and Stephen Siderow’s fund, Blue Mountain Capital, also sold off its stock, about $0.6 million worth. These transactions are interesting, as total hedge fund interest dropped by 2 funds heading into Q3.