Is Medley Capital Corp (MCC) A Good Stock To Buy?

Before we spend days researching a stock idea we like to take a look at how hedge funds and billionaire investors recently traded that stock. Russell 2000 ETF (IWM) lagged the larger S&P 500 ETF (SPY) by more than 10 percentage points since the end of the third quarter of 2018. This means hedge funds that are allocating a higher percentage of their portfolio to small-cap stocks were probably underperforming the market. However, this also means that as small-cap stocks start to mean revert, these hedge funds will start delivering better returns than the S&P 500 Index funds. In this article, we will take a look at what hedge funds think about Medley Capital Corp (NYSE:MCC).

Medley Capital Corp (NYSE:MCC) has experienced a decrease in support from the world’s most elite money managers recently. Our calculations also showed that MCC isn’t among the 30 most popular stocks among hedge funds (click for Q3 rankings and see the video below for Q2 rankings).

We leave no stone unturned when looking for the next great investment idea. For example Europe is set to become the world’s largest cannabis market, so we check out this European marijuana stock pitch. One of the most bullish analysts in America just put his money where his mouth is. He says, “I’m investing more today than I did back in early 2009.” So we check out his pitch. We read hedge fund investor letters and listen to stock pitches at hedge fund conferences. We also rely on the best performing hedge funds‘ buy/sell signals. We’re going to go over the fresh hedge fund action encompassing Medley Capital Corp (NYSE:MCC).

At Q3’s end, a total of 9 of the hedge funds tracked by Insider Monkey were long this stock, a change of -10% from the second quarter of 2019. The graph below displays the number of hedge funds with bullish position in MCC over the last 17 quarters. With hedge funds’ capital changing hands, there exists an “upper tier” of noteworthy hedge fund managers who were adding to their stakes significantly (or already accumulated large positions). 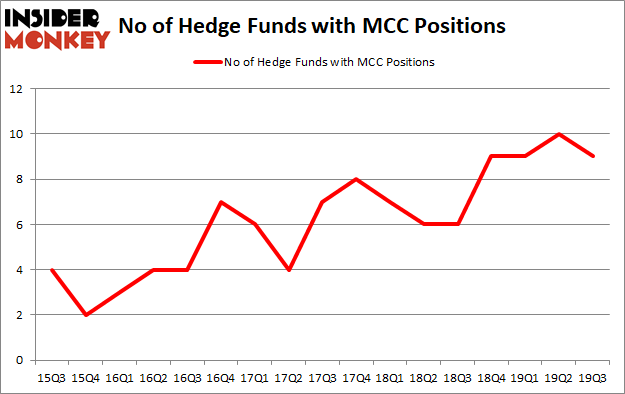 When looking at the institutional investors followed by Insider Monkey, Stephen Loukas, David A. Lorber, Zachary George’s FrontFour Capital Group has the most valuable position in Medley Capital Corp (NYSE:MCC), worth close to $4.2 million, comprising 16% of its total 13F portfolio. The second most bullish fund manager is Bradley Louis Radoff of Fondren Management, with a $4.1 million position; 3.4% of its 13F portfolio is allocated to the company. Some other professional money managers that hold long positions include Michael M. Rothenberg’s Moab Capital Partners, Jim Roumell’s Roumell Asset Management and James Dondero’s Highland Capital Management. In terms of the portfolio weights assigned to each position FrontFour Capital Group allocated the biggest weight to Medley Capital Corp (NYSE:MCC), around 15.97% of its 13F portfolio. Roumell Asset Management is also relatively very bullish on the stock, earmarking 6.41 percent of its 13F equity portfolio to MCC.

We view hedge fund activity in the stock unfavorable, but in this case there was only a single hedge fund selling its entire position: Citadel Investment Group. One hedge fund selling its entire position doesn’t always imply a bearish intent. Theoretically a hedge fund may decide to sell a promising position in order to invest the proceeds in a more promising idea. However, we don’t think this is the case in this case because none of the 750+ hedge funds tracked by Insider Monkey identified MCC as a viable investment and initiated a position in the stock.

As you can see these stocks had an average of 9.25 hedge funds with bullish positions and the average amount invested in these stocks was $13 million. That figure was $16 million in MCC’s case. Paratek Pharmaceuticals Inc (NASDAQ:PRTK) is the most popular stock in this table. On the other hand Veru Inc. (NASDAQ:VERU) is the least popular one with only 5 bullish hedge fund positions. Medley Capital Corp (NYSE:MCC) is not the least popular stock in this group but hedge fund interest is still below average. This is a slightly negative signal and we’d rather spend our time researching stocks that hedge funds are piling on. Our calculations showed that top 20 most popular stocks among hedge funds returned 37.4% in 2019 through the end of November and outperformed the S&P 500 ETF (SPY) by 9.9 percentage points. Unfortunately MCC wasn’t nearly as popular as these 20 stocks (hedge fund sentiment was quite bearish); MCC investors were disappointed as the stock returned -15.8% during the first two months of the fourth quarter and underperformed the market. If you are interested in investing in large cap stocks with huge upside potential, you should check out the top 20 most popular stocks among hedge funds as 70 percent of these stocks already outperformed the market in Q4.