Is MarketAxess Holdings Inc. (MKTX) A Good Stock To Buy?

Hedge funds may not always be right, even collectively, but data shows that their consensus long positions have historically outperformed broader market benchmarks. For example, the Goldman Sachs’ VIP list, which includes the 50 stocks that appear the most often among hedge funds’ top-10 largest holdings, has beaten the S&P 500 gauge on a quarterly basis 64% of the time since 2001, including last year, when it delivered impressive 23% returns in a flat market. Meanwhile, Goldman Sachs’ list of the 20 ‘Most Concentrated’ stocks, which hedge funds own the highest percentage of in terms of the stock’s float, has gained 18% this year to the S&P 500’s 8% gains. Clearly, it’s worthwhile to pay attention to what hedge funds are buying, so let’s check out the latest 13F filing data to see what they think about MarketAxess Holdings Inc. (NASDAQ:MKTX) .

MarketAxess Holdings Inc. (NASDAQ:MKTX) shares didn’t see a lot of action during the third quarter. Overall, hedge fund sentiment was unchanged. The stock was in 20 hedge funds’ portfolios at the end of the third quarter of 2016. At the end of this article we will also compare MKTX to other stocks including Herbalife Ltd. (NYSE:HLF), Empresa Nacional de Electricidad S.A. (NYSE:EOCC), and CBOE Holdings, Inc (NASDAQ:CBOE) to get a better sense of its popularity.

At Q3’s end, a total of 20 of the hedge funds tracked by Insider Monkey were bullish on this stock, same as in the previous quarter. The graph below displays the number of hedge funds with bullish position in MKTX over the last 5 quarters. With the smart money’s positions undergoing their usual ebb and flow, there exists a select group of key hedge fund managers who were increasing their holdings considerably (or already accumulated large positions). 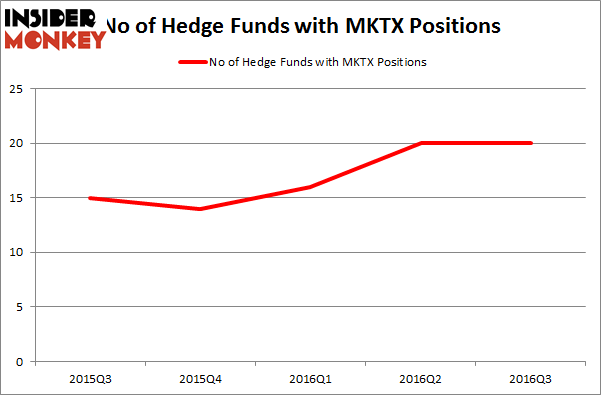 According to publicly available hedge fund and institutional investor holdings data compiled by Insider Monkey, Cliff Asness’ AQR Capital Management has the number one position in MarketAxess Holdings Inc. (NASDAQ:MKTX), worth close to $20.8 million. Coming in second is Arrowstreet Capital, led by Peter Rathjens, Bruce Clarke and John Campbell, which holds a $17.1 million position. Remaining professional money managers with similar optimism include James Parsons’ Junto Capital Management, D. E. Shaw’s D E Shaw and Chuck Royce’s Royce & Associates. We should note that none of these hedge funds are among our list of the 100 best performing hedge funds which is based on the performance of their 13F long positions in non-microcap stocks.