Is MannKind Corporation (MNKD) Going to Burn These Hedge Funds?

Most investors tend to think that hedge funds and other asset managers are worthless, as they cannot beat even simple index fund portfolios. In fact, most people expect hedge funds to compete with and outperform the bull market that we have witnessed in recent years. However, hedge funds are generally partially hedged and aim at delivering attractive risk-adjusted returns rather than following the ups and downs of equity markets hoping that they will outperform the broader market. Our research shows that certain hedge funds do have great stock picking skills (and we can identify these hedge funds in advance pretty accurately), so let’s take a glance at the smart money sentiment towards MannKind Corporation (NASDAQ:MNKD).

MannKind Corporation (NASDAQ:MNKD) shares haven’t seen a lot of action during the third quarter. Overall, hedge fund sentiment was unchanged. The stock was in 6 hedge funds’ portfolios at the end of the third quarter of 2019. The level and the change in hedge fund popularity aren’t the only variables you need to analyze to decipher hedge funds’ perspectives. A stock may witness a boost in popularity but it may still be less popular than similarly priced stocks. That’s why at the end of this article we will examine companies such as RGC Resources, Inc. (NASDAQ:RGCO), U.S. Xpress Enterprises, Inc. (NYSE:USX), and Evofem Biosciences, Inc. (NASDAQ:EVFM) to gather more data points. Our calculations also showed that MNKD isn’t among the 30 most popular stocks among hedge funds (click for Q3 rankings and see the video below for Q2 rankings).

We leave no stone unturned when looking for the next great investment idea. For example Discover is offering this insane cashback card, so we look into shorting the stock. One of the most bullish analysts in America just put his money where his mouth is. He says, “I’m investing more today than I did back in early 2009.” So we check out his pitch. We read hedge fund investor letters and listen to stock pitches at hedge fund conferences. We even check out this option genius’ weekly trade ideas. This December, we recommended Adams Energy as a one-way bet based on an under-the-radar fund manager’s investor letter and the stock already gained 20 percent. With all of this in mind let’s take a look at the recent hedge fund action regarding MannKind Corporation (NASDAQ:MNKD).

What have hedge funds been doing with MannKind Corporation (NASDAQ:MNKD)?

Heading into the fourth quarter of 2019, a total of 6 of the hedge funds tracked by Insider Monkey were long this stock, a change of 0% from the second quarter of 2019. Below, you can check out the change in hedge fund sentiment towards MNKD over the last 17 quarters. With hedgies’ positions undergoing their usual ebb and flow, there exists an “upper tier” of noteworthy hedge fund managers who were adding to their stakes considerably (or already accumulated large positions). 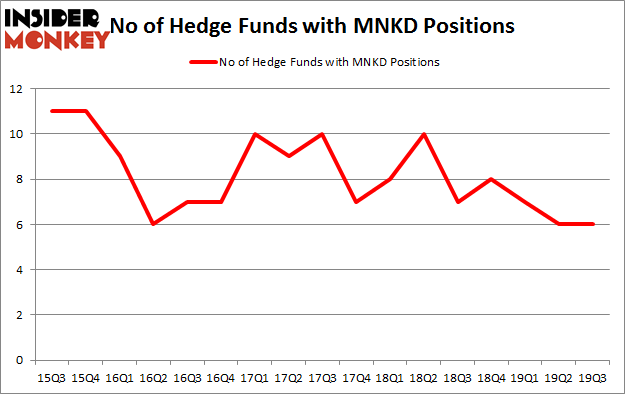 More specifically, Raging Capital Management was the largest shareholder of MannKind Corporation (NASDAQ:MNKD), with a stake worth $3.8 million reported as of the end of September. Trailing Raging Capital Management was D E Shaw, which amassed a stake valued at $1.6 million. Scopia Capital, Citadel Investment Group, and HighVista Strategies were also very fond of the stock, becoming one of the largest hedge fund holders of the company. In terms of the portfolio weights assigned to each position Raging Capital Management allocated the biggest weight to MannKind Corporation (NASDAQ:MNKD), around 0.61% of its 13F portfolio. Scopia Capital is also relatively very bullish on the stock, setting aside 0.07 percent of its 13F equity portfolio to MNKD.

We view hedge fund activity in the stock unfavorable, but in this case there was only a single hedge fund selling its entire position: Two Sigma Advisors. One hedge fund selling its entire position doesn’t always imply a bearish intent. Theoretically a hedge fund may decide to sell a promising position in order to invest the proceeds in a more promising idea. However, we don’t think this is the case in this case because only one of the 800+ hedge funds tracked by Insider Monkey identified as a viable investment and initiated a position in the stock (that fund was HighVista Strategies).

As you can see these stocks had an average of 5 hedge funds with bullish positions and the average amount invested in these stocks was $26 million. That figure was $7 million in MNKD’s case. U.S. Xpress Enterprises, Inc. (NYSE:USX) is the most popular stock in this table. On the other hand RGC Resources, Inc. (NASDAQ:RGCO) is the least popular one with only 1 bullish hedge fund positions. MannKind Corporation (NASDAQ:MNKD) is not the most popular stock in this group but hedge fund interest is still above average. This is a slightly positive signal but we’d rather spend our time researching stocks that hedge funds are piling on. Our calculations showed that top 20 most popular stocks among hedge funds returned 37.4% in 2019 through the end of November and outperformed the S&P 500 ETF (SPY) by 9.9 percentage points. Unfortunately MNKD wasn’t nearly as popular as these 20 stocks and hedge funds that were betting on MNKD were disappointed as the stock returned -1.6% during the fourth quarter (through the end of November) and underperformed the market. If you are interested in investing in large cap stocks with huge upside potential, you should check out the top 20 most popular stocks among hedge funds as many of these stocks already outperformed the market so far this year.

Do Hedge Funds Love China Yuchai International Limited (CYD)?
Monthly Newsletter Strategy
Download a free copy of our newsletter and see the details inside!
Hedge Fund Resource Center
Related News
Market Movers Today: AbbVie Inc (ABBV), Intel Corporation (INTC), Wynn Resorts, Limited (WYNN), and More 33 Recent Stories Telling How The Financial Markets Are Doing Today 40 Fresh Stories to Know How is it Going in the Financial Markets Today Wondering What’s Going On in the Financial Markets Today? Check Out These 36 Stories! 13G Filing: James E. Flynn and Mannkind Corp (MNKD) Why MannKind Corporation (MNKD) Shares Popped on Friday Here’s What Is Going On In The Financial Markets Today? 11 Companies That Caught Lying To The Public, Deceived Customers 10 Countries with the Highest Coffee Consumption in the World 10 Stocks That Went Up During The 2008 Crash
Billionaire Hedge Funds