Is Mallinckrodt plc (MNK) A Good Stock To Buy?

Insider Monkey finished processing more than 700 13F filings submitted by hedge funds and prominent investors. These filings show these funds’ portfolio positions as of December 31st, 2018. What do these smart investors think about Mallinckrodt plc (NYSE:MNK)?

We’re going to take a gander at the recent hedge fund action regarding Mallinckrodt plc (NYSE:MNK).

How have hedgies been trading Mallinckrodt plc (NYSE:MNK)?

At Q4’s end, a total of 22 of the hedge funds tracked by Insider Monkey were bullish on this stock, a change of 10% from the previous quarter. On the other hand, there were a total of 21 hedge funds with a bullish position in MNK a year ago. With hedge funds’ capital changing hands, there exists a few key hedge fund managers who were adding to their holdings meaningfully (or already accumulated large positions). 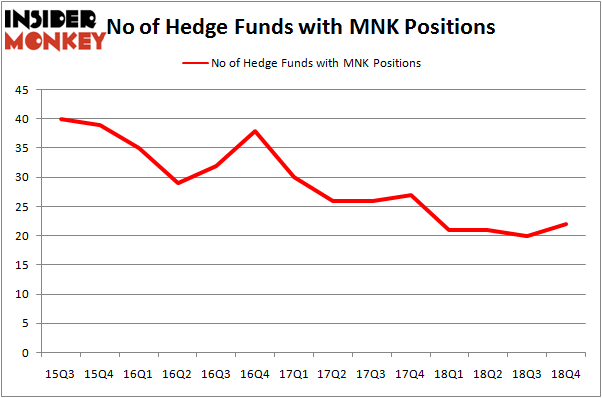 Among these funds, D E Shaw held the most valuable stake in Mallinckrodt plc (NYSE:MNK), which was worth $71.5 million at the end of the third quarter. On the second spot was AQR Capital Management which amassed $38 million worth of shares. Moreover, Armistice Capital, Renaissance Technologies, and Royce & Associates were also bullish on Mallinckrodt plc (NYSE:MNK), allocating a large percentage of their portfolios to this stock.

Now, some big names have jumped into Mallinckrodt plc (NYSE:MNK) headfirst. Arrowstreet Capital, managed by Peter Rathjens, Bruce Clarke and John Campbell, assembled the most outsized position in Mallinckrodt plc (NYSE:MNK). Arrowstreet Capital had $5.8 million invested in the company at the end of the quarter. David Harding’s Winton Capital Management also initiated a $3.5 million position during the quarter. The other funds with new positions in the stock are Lee Ainslie’s Maverick Capital, John Overdeck and David Siegel’s Two Sigma Advisors, and David Costen Haley’s HBK Investments.

Let’s check out hedge fund activity in other stocks – not necessarily in the same industry as Mallinckrodt plc (NYSE:MNK) but similarly valued. We will take a look at Instructure, Inc. (NYSE:INST), Aircastle Limited (NYSE:AYR), AAR Corp. (NYSE:AIR), and Gray Television, Inc. (NYSE:GTN). This group of stocks’ market values are closest to MNK’s market value.

As you can see these stocks had an average of 18.75 hedge funds with bullish positions and the average amount invested in these stocks was $174 million. That figure was $224 million in MNK’s case. Gray Television, Inc. (NYSE:GTN) is the most popular stock in this table. On the other hand Aircastle Limited (NYSE:AYR) is the least popular one with only 13 bullish hedge fund positions. Mallinckrodt plc (NYSE:MNK) is not the most popular stock in this group but hedge fund interest is still above average. This is a slightly positive signal but we’d rather spend our time researching stocks that hedge funds are piling on. Our calculations showed that top 15 most popular stocks) among hedge funds returned 24.2% through April 22nd and outperformed the S&P 500 ETF (SPY) by more than 7 percentage points. Unfortunately MNK wasn’t nearly as popular as these 15 stock and hedge funds that were betting on MNK were disappointed as the stock returned 12.7% and underperformed the market. If you are interested in investing in large cap stocks with huge upside potential, you should check out the top 15 most popular stocks) among hedge funds as 13 of these stocks already outperformed the market this year.