A whopping number of 13F filings filed with U.S. Securities and Exchange Commission has been processed by Insider Monkey so that individual investors can look at the overall hedge fund sentiment towards the stocks included in their watchlists. These freshly-submitted public filings disclose money managers’ equity positions as of the end of the three-month period that ended June 28, so let’s proceed with the discussion of the hedge fund sentiment on Main Street Capital Corporation (NYSE:MAIN).

Main Street Capital Corporation (NYSE:MAIN) shares haven’t seen a lot of action during the second quarter. Overall, hedge fund sentiment was unchanged. The stock was in 4 hedge funds’ portfolios at the end of the second quarter of 2019. The level and the change in hedge fund popularity aren’t the only variables you need to analyze to decipher hedge funds’ perspectives. A stock may witness a boost in popularity but it may still be less popular than similarly priced stocks. That’s why at the end of this article we will examine companies such as Lions Gate Entertainment Corp. (NYSE:LGF-B), Cirrus Logic, Inc. (NASDAQ:CRUS), and John Wiley & Sons Inc (NYSE:JW) to gather more data points. Our calculations also showed that MAIN isn’t among the 30 most popular stocks among hedge funds (view video below).

In the 21st century investor’s toolkit there are a lot of formulas stock traders can use to assess their stock investments. A duo of the most underrated formulas are hedge fund and insider trading moves. Our researchers have shown that, historically, those who follow the top picks of the best hedge fund managers can outpace their index-focused peers by a superb margin (see the details here).

What have hedge funds been doing with Main Street Capital Corporation (NYSE:MAIN)?

Heading into the third quarter of 2019, a total of 4 of the hedge funds tracked by Insider Monkey were long this stock, a change of 0% from the previous quarter. By comparison, 7 hedge funds held shares or bullish call options in MAIN a year ago. With the smart money’s capital changing hands, there exists a few notable hedge fund managers who were adding to their stakes meaningfully (or already accumulated large positions). 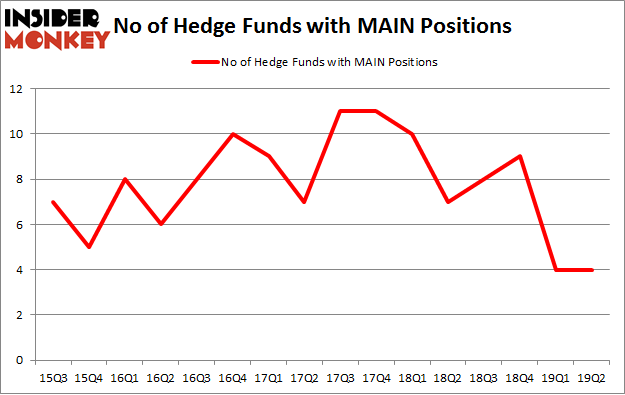 According to Insider Monkey’s hedge fund database, Robert B. Gillam’s McKinley Capital Management has the number one position in Main Street Capital Corporation (NYSE:MAIN), worth close to $6.2 million, corresponding to 0.4% of its total 13F portfolio. The second largest stake is held by Citadel Investment Group, managed by Ken Griffin, which holds a $1.9 million call position; the fund has less than 0.1%% of its 13F portfolio invested in the stock. Other hedge funds and institutional investors that are bullish comprise Richard Driehaus’s Driehaus Capital, Ken Griffin’s Citadel Investment Group and D. E. Shaw’s D E Shaw.

We view hedge fund activity in the stock unfavorable, but in this case there was only a single hedge fund selling its entire position: ExodusPoint Capital. One hedge fund selling its entire position doesn’t always imply a bearish intent. Theoretically a hedge fund may decide to sell a promising position in order to invest the proceeds in a more promising idea. However, we don’t think this is the case in this case because only one of the 800+ hedge funds tracked by Insider Monkey identified as a viable investment and initiated a position in the stock (that fund was Driehaus Capital).

As you can see these stocks had an average of 17.25 hedge funds with bullish positions and the average amount invested in these stocks was $182 million. That figure was $8 million in MAIN’s case. Cirrus Logic, Inc. (NASDAQ:CRUS) is the most popular stock in this table. On the other hand Brandywine Realty Trust (NYSE:BDN) is the least popular one with only 14 bullish hedge fund positions. Compared to these stocks Main Street Capital Corporation (NYSE:MAIN) is even less popular than BDN. Hedge funds clearly dropped the ball on MAIN as the stock delivered strong returns, though hedge funds’ consensus picks still generated respectable returns. Our calculations showed that top 20 most popular stocks among hedge funds returned 24.4% in 2019 through September 30th and outperformed the S&P 500 ETF (SPY) by 4 percentage points. A small number of hedge funds were also right about betting on MAIN as the stock returned 6.6% during the third quarter and outperformed the market by an even larger margin.