Is MagnaChip Semiconductor Corporation (MX) A Good Stock To Buy ?

Our extensive research has shown that imitating the smart money can generate significant returns for retail investors, which is why we track nearly 750 active prominent money managers and analyze their quarterly 13F filings. The stocks that are heavily bought by hedge funds historically outperformed the market, though there is no shortage of high profile failures like hedge funds’ 2018 losses in Facebook and Apple. Let’s take a closer look at what the funds we track think about MagnaChip Semiconductor Corporation (NYSE:MX) in this article.

MagnaChip Semiconductor Corporation (NYSE:MX) shareholders have witnessed a decrease in hedge fund sentiment of late. MX was in 19 hedge funds’ portfolios at the end of the third quarter of 2019. There were 21 hedge funds in our database with MX holdings at the end of the previous quarter. Our calculations also showed that MX isn’t among the 30 most popular stocks among hedge funds (click for Q3 rankings and see the video below for Q2 rankings).

Unlike the largest US hedge funds that are convinced Dow will soar past 40,000 or the world’s most bearish hedge fund that’s more convinced than ever that a crash is coming, our long-short investment strategy doesn’t rely on bull or bear markets to deliver double digit returns. We only rely on the best performing hedge funds‘ buy/sell signals. We’re going to take a peek at the fresh hedge fund action encompassing MagnaChip Semiconductor Corporation (NYSE:MX).

What have hedge funds been doing with MagnaChip Semiconductor Corporation (NYSE:MX)?

At Q3’s end, a total of 19 of the hedge funds tracked by Insider Monkey held long positions in this stock, a change of -10% from the previous quarter. Below, you can check out the change in hedge fund sentiment towards MX over the last 17 quarters. With hedge funds’ positions undergoing their usual ebb and flow, there exists a few noteworthy hedge fund managers who were boosting their stakes substantially (or already accumulated large positions). 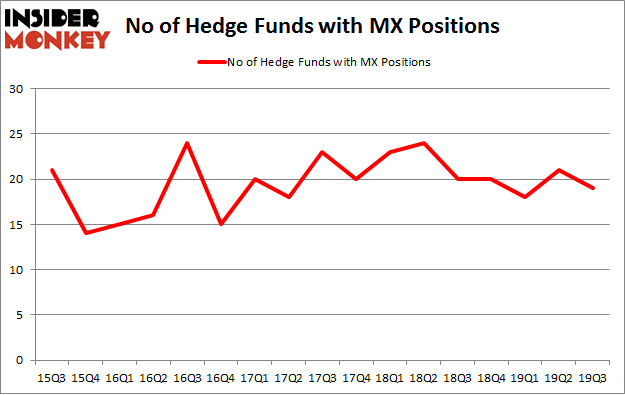 Among these funds, Brigade Capital held the most valuable stake in MagnaChip Semiconductor Corporation (NYSE:MX), which was worth $37 million at the end of the third quarter. On the second spot was Oaktree Capital Management which amassed $33 million worth of shares. Rubric Capital Management, North Run Capital, and Point72 Asset Management were also very fond of the stock, becoming one of the largest hedge fund holders of the company. In terms of the portfolio weights assigned to each position North Run Capital allocated the biggest weight to MagnaChip Semiconductor Corporation (NYSE:MX), around 6.36% of its 13F portfolio. Proxima Capital Management is also relatively very bullish on the stock, dishing out 5.7 percent of its 13F equity portfolio to MX.

Since MagnaChip Semiconductor Corporation (NYSE:MX) has faced a decline in interest from hedge fund managers, it’s easy to see that there was a specific group of fund managers that slashed their entire stakes last quarter. At the top of the heap, Ken Griffin’s Citadel Investment Group dropped the biggest stake of the 750 funds followed by Insider Monkey, valued at about $0.6 million in stock, and Peter Muller’s PDT Partners was right behind this move, as the fund said goodbye to about $0.5 million worth. These transactions are interesting, as aggregate hedge fund interest was cut by 2 funds last quarter.

As you can see these stocks had an average of 11.5 hedge funds with bullish positions and the average amount invested in these stocks was $48 million. That figure was $138 million in MX’s case. GenMark Diagnostics, Inc (NASDAQ:GNMK) is the most popular stock in this table. On the other hand Lawson Products, Inc. (NASDAQ:LAWS) is the least popular one with only 7 bullish hedge fund positions. Compared to these stocks MagnaChip Semiconductor Corporation (NYSE:MX) is more popular among hedge funds. Our calculations showed that top 20 most popular stocks among hedge funds returned 37.4% in 2019 through the end of November and outperformed the S&P 500 ETF (SPY) by 9.9 percentage points. Hedge funds were also right about betting on MX as the stock returned 12.3% during the first two months of Q4 and outperformed the market by an even larger margin. Hedge funds were clearly right about piling into this stock relative to other stocks with similar market capitalizations.