Is Madrigal Pharmaceuticals, Inc. (MDGL) A Good Stock To Buy?

Many investors, including Paul Tudor Jones or Stan Druckenmiller, have been saying before the Q4 market crash that the stock market is overvalued due to a low interest rate environment that leads to companies swapping their equity for debt and focusing mostly on short-term performance such as beating the quarterly earnings estimates. In the fourth quarter, many investors lost money due to unpredictable events such as the sudden increase in long-term interest rates and unintended consequences of the trade war with China. Nevertheless, many of the stocks that tanked in the fourth quarter still sport strong fundamentals and their decline was more related to the general market sentiment rather than their individual performance and hedge funds kept their bullish stance. In this article we will find out how hedge fund sentiment to Madrigal Pharmaceuticals, Inc. (NASDAQ:MDGL) changed recently.

Madrigal Pharmaceuticals, Inc. (NASDAQ:MDGL) was in 19 hedge funds’ portfolios at the end of December. MDGL shareholders have witnessed a decrease in support from the world’s most elite money managers of late. There were 26 hedge funds in our database with MDGL holdings at the end of the previous quarter. Our calculations also showed that MDGL isn’t among the 30 most popular stocks among hedge funds.

According to most investors, hedge funds are viewed as slow, old investment vehicles of years past. While there are over 8000 funds trading at the moment, Our experts choose to focus on the moguls of this club, approximately 750 funds. It is estimated that this group of investors watch over most of all hedge funds’ total capital, and by watching their inimitable investments, Insider Monkey has unsheathed a few investment strategies that have historically outperformed the market. Insider Monkey’s flagship hedge fund strategy defeated the S&P 500 index by nearly 5 percentage points annually since its inception in May 2014 through early November 2018. We were able to generate large returns even by identifying short candidates. Our portfolio of short stocks lost 27.5% since February 2017 (through March 12th) even though the market was up nearly 25% during the same period. We just shared a list of 6 short targets in our latest quarterly update and they are already down an average of 6% in less than a month.

What does the smart money think about Madrigal Pharmaceuticals, Inc. (NASDAQ:MDGL)? 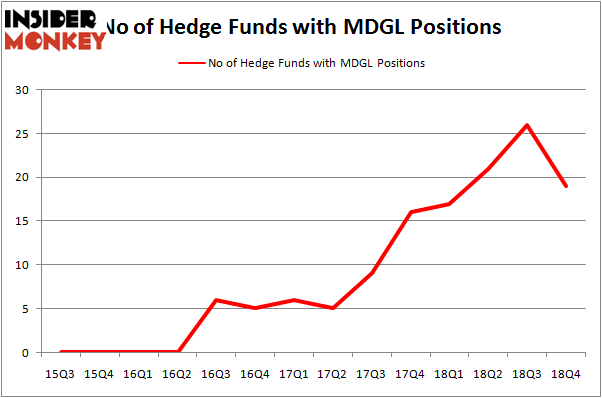 More specifically, Baker Bros. Advisors was the largest shareholder of Madrigal Pharmaceuticals, Inc. (NASDAQ:MDGL), with a stake worth $131.8 million reported as of the end of December. Trailing Baker Bros. Advisors was Healthcor Management LP, which amassed a stake valued at $55.2 million. Rock Springs Capital Management, venBio Select Advisor, and Citadel Investment Group were also very fond of the stock, giving the stock large weights in their portfolios.

Judging by the fact that Madrigal Pharmaceuticals, Inc. (NASDAQ:MDGL) has experienced a decline in interest from the aggregate hedge fund industry, it’s safe to say that there exists a select few fund managers that elected to cut their entire stakes heading into Q3. It’s worth mentioning that Steven Boyd’s Armistice Capital dropped the largest stake of the 700 funds monitored by Insider Monkey, comprising an estimated $17.1 million in stock. Paul Marshall and Ian Wace’s fund, Marshall Wace LLP, also dropped its stock, about $4.2 million worth. These moves are important to note, as total hedge fund interest fell by 7 funds heading into Q3.

As you can see these stocks had an average of 13.25 hedge funds with bullish positions and the average amount invested in these stocks was $147 million. That figure was $288 million in MDGL’s case. PTC Therapeutics, Inc. (NASDAQ:PTCT) is the most popular stock in this table. On the other hand Kayne Anderson MLP/Midstream Investment Company (NYSE:KYN) is the least popular one with only 4 bullish hedge fund positions. Madrigal Pharmaceuticals, Inc. (NASDAQ:MDGL) is not the most popular stock in this group but hedge fund interest is still above average. This is a slightly positive signal but we’d rather spend our time researching stocks that hedge funds are piling on. Our calculations showed that top 15 most popular stocks) among hedge funds returned 24.2% through April 22nd and outperformed the S&P 500 ETF (SPY) by more than 7 percentage points. Unfortunately MDGL wasn’t nearly as popular as these 15 stock and hedge funds that were betting on MDGL were disappointed as the stock returned -7.1% and underperformed the market. If you are interested in investing in large cap stocks with huge upside potential, you should check out the top 15 most popular stocks) among hedge funds as 13 of these stocks already outperformed the market this year.