Is Louisiana-Pacific Corporation (LPX) A Good Stock To Buy ?

Is Louisiana-Pacific Corporation (NYSE:LPX) a buy here? The best stock pickers are betting on the stock. The number of long hedge fund bets moved up by 3 recently. Our calculations also showed that lpx isn’t among the 30 most popular stocks among hedge funds.

How have hedgies been trading Louisiana-Pacific Corporation (NYSE:LPX)?

At the end of the fourth quarter, a total of 31 of the hedge funds tracked by Insider Monkey held long positions in this stock, a change of 11% from the second quarter of 2018. The graph below displays the number of hedge funds with bullish position in LPX over the last 14 quarters. So, let’s review which hedge funds were among the top holders of the stock and which hedge funds were making big moves. 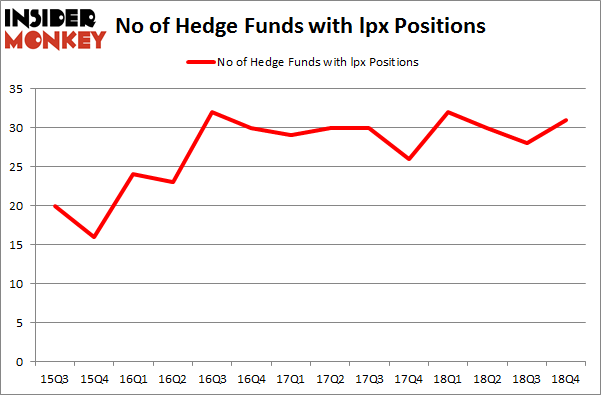 Among these funds, Adage Capital Management held the most valuable stake in Louisiana-Pacific Corporation (NYSE:LPX), which was worth $86 million at the end of the third quarter. On the second spot was GLG Partners which amassed $66.7 million worth of shares. Moreover, Millennium Management, Renaissance Technologies, and Owl Creek Asset Management were also bullish on Louisiana-Pacific Corporation (NYSE:LPX), allocating a large percentage of their portfolios to this stock.

As one would reasonably expect, specific money managers were breaking ground themselves. Owl Creek Asset Management, managed by Jeffrey Altman, initiated the biggest position in Louisiana-Pacific Corporation (NYSE:LPX). Owl Creek Asset Management had $23.7 million invested in the company at the end of the quarter. David Brown’s Hawk Ridge Management also initiated a $12.9 million position during the quarter. The other funds with new positions in the stock are Paul Marshall and Ian Wace’s Marshall Wace LLP, Daniel Arbess’s Perella Weinberg Partners, and Hoon Kim’s Quantinno Capital.

As you can see these stocks had an average of 15.25 hedge funds with bullish positions and the average amount invested in these stocks was $148 million. That figure was $427 million in LPX’s case. Macquarie Infrastructure Corporation (NYSE:MIC) is the most popular stock in this table. On the other hand Manchester United PLC (NYSE:MANU) is the least popular one with only 9 bullish hedge fund positions. Compared to these stocks Louisiana-Pacific Corporation (NYSE:LPX) is more popular among hedge funds. Our calculations showed that top 15 most popular stocks) among hedge funds returned 24.2% through April 22nd and outperformed the S&P 500 ETF (SPY) by more than 7 percentage points. Unfortunately LPX wasn’t nearly as popular as these 15 stock and hedge funds that were betting on LPX were disappointed as the stock returned 8.1% and underperformed the market. If you are interested in investing in large cap stocks with huge upside potential, you should check out the top 15 most popular stocks) among hedge funds as 13 of these stocks already outperformed the market this year.