Is Logitech International SA (LOGI) A Good Stock To Buy?

After several tireless days we have finished crunching the numbers from nearly 750 13F filings issued by the elite hedge funds and other investment firms that we track at Insider Monkey, which disclosed those firms’ equity portfolios as of June 28. The results of that effort will be put on display in this article, as we share valuable insight into the smart money sentiment towards Logitech International SA (NASDAQ:LOGI).

Is Logitech International SA (NASDAQ:LOGI) a healthy stock for your portfolio? Prominent investors are taking an optimistic view. The number of long hedge fund bets moved up by 1 recently. Our calculations also showed that LOGI isn’t among the 30 most popular stocks among hedge funds (view the video below). LOGI was in 16 hedge funds’ portfolios at the end of June. There were 15 hedge funds in our database with LOGI positions at the end of the previous quarter. 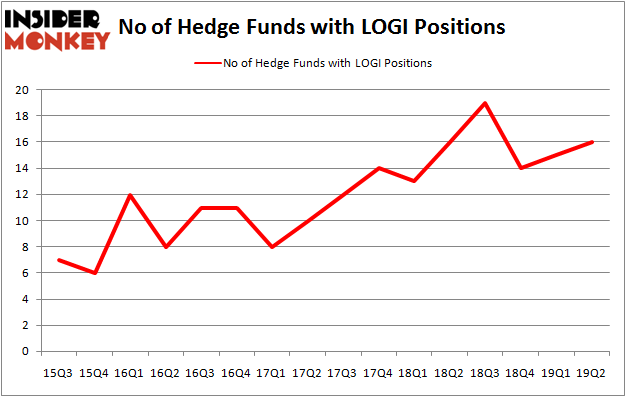 Unlike some fund managers who are betting on Dow reaching 40000 in a year, our long-short investment strategy doesn’t rely on bull markets to deliver double digit returns. We only rely on hedge fund buy/sell signals. We’re going to take a peek at the latest hedge fund action regarding Logitech International SA (NASDAQ:LOGI).

What does smart money think about Logitech International SA (NASDAQ:LOGI)?

Heading into the third quarter of 2019, a total of 16 of the hedge funds tracked by Insider Monkey held long positions in this stock, a change of 7% from one quarter earlier. By comparison, 16 hedge funds held shares or bullish call options in LOGI a year ago. With the smart money’s sentiment swirling, there exists an “upper tier” of notable hedge fund managers who were boosting their holdings significantly (or already accumulated large positions).

Of the funds tracked by Insider Monkey, Renaissance Technologies, holds the most valuable position in Logitech International SA (NASDAQ:LOGI). Renaissance Technologies has a $98.4 million position in the stock, comprising 0.1% of its 13F portfolio. Coming in second is Two Sigma Advisors, managed by John Overdeck and David Siegel, which holds a $41.2 million position; the fund has 0.1% of its 13F portfolio invested in the stock. Remaining members of the smart money that are bullish include Peter Rathjens, Bruce Clarke and John Campbell’s Arrowstreet Capital, Paul Marshall and Ian Wace’s Marshall Wace LLP and Peter Muller’s PDT Partners.

As you can see these stocks had an average of 30 hedge funds with bullish positions and the average amount invested in these stocks was $1002 million. That figure was $208 million in LOGI’s case. GCI Liberty, Inc. (NASDAQ:GLIBA) is the most popular stock in this table. On the other hand ANGI Homeservices Inc. (NASDAQ:ANGI) is the least popular one with only 20 bullish hedge fund positions. Compared to these stocks Logitech International SA (NASDAQ:LOGI) is even less popular than ANGI. Our calculations showed that top 20 most popular stocks among hedge funds returned 24.4% in 2019 through September 30th and outperformed the S&P 500 ETF (SPY) by 4 percentage points. A small number of hedge funds were also right about betting on LOGI, though not to the same extent, as the stock returned 2.5% during the third quarter and outperformed the market as well.