Is LogicBio Therapeutics, Inc. (LOGC) A Good Stock To Buy?

Most investors tend to think that hedge funds and other asset managers are worthless, as they cannot beat even simple index fund portfolios. In fact, most people expect hedge funds to compete with and outperform the bull market that we have witnessed in recent years. However, hedge funds are generally partially hedged and aim at delivering attractive risk-adjusted returns rather than following the ups and downs of equity markets hoping that they will outperform the broader market. Our research shows that certain hedge funds do have great stock picking skills (and we can identify these hedge funds in advance pretty accurately), so let’s take a glance at the smart money sentiment towards LogicBio Therapeutics, Inc. (NASDAQ:LOGC).

n addition to following the biggest hedge funds for investment ideas, we also share stock pitches from conferences, investor letters and other sources  like this one where the fund manager is talking about two under the radar 1000% return potential stocks: first one in internet infrastructure and the second in the heart of advertising market. We use hedge fund buy/sell signals to determine whether to conduct in-depth analysis of these stock ideas which take days. Let’s take a look at the latest hedge fund action encompassing LogicBio Therapeutics, Inc. (NASDAQ:LOGC).

How have hedgies been trading LogicBio Therapeutics, Inc. (NASDAQ:LOGC)?

At the end of the second quarter, a total of 6 of the hedge funds tracked by Insider Monkey were long this stock, a change of 0% from the first quarter of 2019. By comparison, 0 hedge funds held shares or bullish call options in LOGC a year ago. With the smart money’s sentiment swirling, there exists a select group of notable hedge fund managers who were increasing their holdings considerably (or already accumulated large positions). 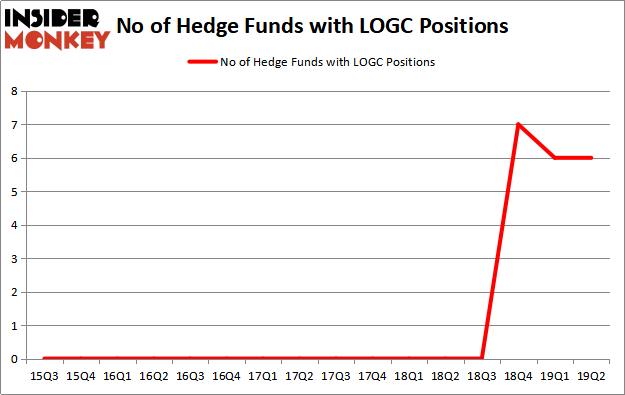 According to publicly available hedge fund and institutional investor holdings data compiled by Insider Monkey, OrbiMed Advisors, managed by Samuel Isaly, holds the largest position in LogicBio Therapeutics, Inc. (NASDAQ:LOGC). OrbiMed Advisors has a $84.1 million position in the stock, comprising 1.3% of its 13F portfolio. On OrbiMed Advisors’s heels is Phill Gross and Robert Atchinson of Adage Capital Management, with a $16.9 million position; the fund has less than 0.1%% of its 13F portfolio invested in the stock. Remaining hedge funds and institutional investors with similar optimism consist of Jeremy Green’s Redmile Group, Robert Pohly’s Samlyn Capital and Didric Cederholm’s Lion Point.

As you can see these stocks had an average of 4.75 hedge funds with bullish positions and the average amount invested in these stocks was $23 million. That figure was $128 million in LOGC’s case. Hallmark Financial Services, Inc. (NASDAQ:HALL) is the most popular stock in this table. On the other hand FVCBankcorp, Inc. (NASDAQ:FVCB) is the least popular one with only 2 bullish hedge fund positions. LogicBio Therapeutics, Inc. (NASDAQ:LOGC) is not the most popular stock in this group but hedge fund interest is still above average. This is a slightly positive signal but we’d rather spend our time researching stocks that hedge funds are piling on. Our calculations showed that top 20 most popular stocks among hedge funds returned 24.4% in 2019 through September 30th and outperformed the S&P 500 ETF (SPY) by 4 percentage points. Unfortunately LOGC wasn’t nearly as popular as these 20 stocks and hedge funds that were betting on LOGC were disappointed as the stock returned -16.8% during the third quarter and underperformed the market. If you are interested in investing in large cap stocks with huge upside potential, you should check out the top 20 most popular stocks among hedge funds as many of these stocks already outperformed the market so far this year.

Hedge Funds Have Never Been More Bullish On Constellation Pharmaceuticals,...
Monthly Newsletter Strategy
Download a free copy of our newsletter and see the details inside!
Hedge Fund Resource Center
Related News
25 Largest Hedge Funds In 2019 and Their Surprising Top Stock Pick 8 Free Dating Websites In The U.S 11 Largest Auto Insurance Companies In The US In 2019
Billionaire Hedge Funds