Is Livent Corporation (LTHM) A Good Stock To Buy?

Like everyone else, elite investors make mistakes. Some of their top consensus picks, such as Amazon, Facebook and Alibaba, have not done well in Q4 due to various reasons. Nevertheless, the data show elite investors’ consensus picks have done well on average over the long-term. The top 20 stocks among hedge funds beat the S&P 500 Index ETF by 4 percentage points so far this year. Because their consensus picks have done well, we pay attention to what elite funds think before doing extensive research on a stock. In this article, we take a closer look at Livent Corporation (NYSE:LTHM) from the perspective of those elite funds.

Livent Corporation (NYSE:LTHM) investors should be aware of a decrease in hedge fund interest lately. LTHM was in 21 hedge funds’ portfolios at the end of June. There were 25 hedge funds in our database with LTHM positions at the end of the previous quarter. Our calculations also showed that LTHM isn’t among the 30 most popular stocks among hedge funds (see the video below).

According to most traders, hedge funds are assumed to be unimportant, outdated financial vehicles of yesteryear. While there are greater than 8000 funds trading at the moment, Our researchers choose to focus on the moguls of this club, around 750 funds. It is estimated that this group of investors control bulk of all hedge funds’ total capital, and by watching their finest equity investments, Insider Monkey has discovered many investment strategies that have historically outperformed the broader indices. Insider Monkey’s flagship hedge fund strategy outpaced the S&P 500 index by around 5 percentage points a year since its inception in May 2014. We were able to generate large returns even by identifying short candidates. Our portfolio of short stocks lost 25.7% since February 2017 (through September 30th) even though the market was up more than 33% during the same period. We just shared a list of 10 short targets in our latest quarterly update . 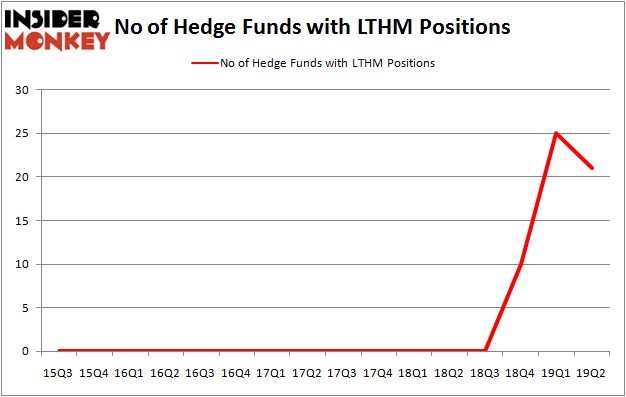 How have hedgies been trading Livent Corporation (NYSE:LTHM)?

At Q2’s end, a total of 21 of the hedge funds tracked by Insider Monkey held long positions in this stock, a change of -16% from one quarter earlier. On the other hand, there were a total of 0 hedge funds with a bullish position in LTHM a year ago. With the smart money’s sentiment swirling, there exists an “upper tier” of key hedge fund managers who were adding to their stakes substantially (or already accumulated large positions).

More specifically, Glenview Capital was the largest shareholder of Livent Corporation (NYSE:LTHM), with a stake worth $64.3 million reported as of the end of March. Trailing Glenview Capital was Luminus Management, which amassed a stake valued at $41.6 million. Cardinal Capital, York Capital Management, and Masters Capital Management were also very fond of the stock, giving the stock large weights in their portfolios.

Judging by the fact that Livent Corporation (NYSE:LTHM) has faced falling interest from hedge fund managers, it’s easy to see that there is a sect of money managers that slashed their positions entirely last quarter. It’s worth mentioning that Israel Englander’s Millennium Management sold off the biggest investment of the “upper crust” of funds watched by Insider Monkey, worth an estimated $33.1 million in stock. Glenn Russell Dubin’s fund, Highbridge Capital Management, also cut its stock, about $2.6 million worth. These transactions are interesting, as aggregate hedge fund interest was cut by 4 funds last quarter.

As you can see these stocks had an average of 16 hedge funds with bullish positions and the average amount invested in these stocks was $115 million. That figure was $167 million in LTHM’s case. Abercrombie & Fitch Co. (NYSE:ANF) is the most popular stock in this table. On the other hand Camping World Holdings, Inc. (NYSE:CWH) is the least popular one with only 9 bullish hedge fund positions. Livent Corporation (NYSE:LTHM) is not the most popular stock in this group but hedge fund interest is still above average. This is a slightly positive signal but we’d rather spend our time researching stocks that hedge funds are piling on. Our calculations showed that top 20 most popular stocks among hedge funds returned 24.4% in 2019 through September 30th and outperformed the S&P 500 ETF (SPY) by 4 percentage points. Unfortunately LTHM wasn’t nearly as popular as these 20 stocks and hedge funds that were betting on LTHM were disappointed as the stock returned -3.3% during the third quarter and underperformed the market. If you are interested in investing in large cap stocks with huge upside potential, you should check out the top 20 most popular stocks among hedge funds as many of these stocks already outperformed the market so far this year.

Genworth Financial Inc (GNW): These Hedge Funds Cashed Out Too Early
Monthly Newsletter Strategy
Download a free copy of our newsletter and see the details inside!
Hedge Fund Resource Center
Related News
Were Hedge Funds Right About Flocking Into Livent Corporation (LTHM) ? 11 Largest Auto Insurance Companies In The US In 2019 10 Poorest Cities in America in 2019 8 Lowest Tar and Nicotine Cigarette Brands in 2019
Billionaire Hedge Funds