Is Ligand Pharmaceuticals Inc. (LGND) A Good Stock To Buy?

At Insider Monkey, we pore over the filings of nearly 750 top investment firms every quarter, a process we have now completed for the latest reporting period. The data we’ve gathered as a result gives us access to a wealth of collective knowledge based on these firms’ portfolio holdings as of December 31. In this article, we will use that wealth of knowledge to determine whether or not Ligand Pharmaceuticals Inc. (NASDAQ:LGND) makes for a good investment right now.

Ligand Pharmaceuticals Inc. (NASDAQ:LGND) was in 24 hedge funds’ portfolios at the end of December. LGND investors should pay attention to a decrease in hedge fund sentiment of late. There were 28 hedge funds in our database with LGND holdings at the end of the previous quarter. Our calculations also showed that LGND isn’t among the 30 most popular stocks among hedge funds.

At the end of the fourth quarter, a total of 24 of the hedge funds tracked by Insider Monkey were long this stock, a change of -14% from the previous quarter. On the other hand, there were a total of 19 hedge funds with a bullish position in LGND a year ago. With the smart money’s capital changing hands, there exists a few key hedge fund managers who were upping their holdings significantly (or already accumulated large positions). 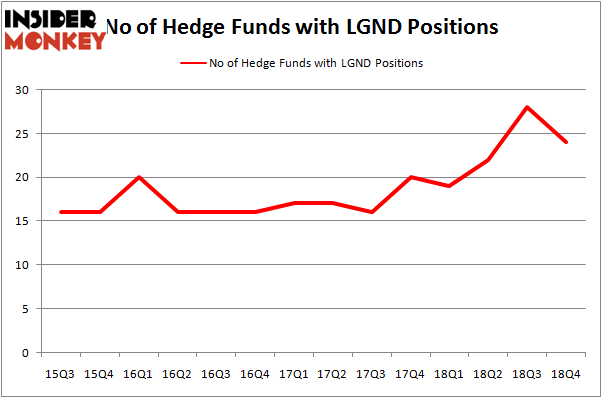 Among these funds, Renaissance Technologies held the most valuable stake in Ligand Pharmaceuticals Inc. (NASDAQ:LGND), which was worth $200.9 million at the end of the third quarter. On the second spot was Millennium Management which amassed $74.2 million worth of shares. Moreover, Cardinal Capital, Dorset Management, and Two Sigma Advisors were also bullish on Ligand Pharmaceuticals Inc. (NASDAQ:LGND), allocating a large percentage of their portfolios to this stock.

Since Ligand Pharmaceuticals Inc. (NASDAQ:LGND) has experienced bearish sentiment from the smart money, logic holds that there was a specific group of hedgies who were dropping their entire stakes heading into Q3. At the top of the heap, John M. Angelo and Michael L. Gordon’s Angelo Gordon & Co dropped the largest stake of all the hedgies tracked by Insider Monkey, worth close to $79.3 million in stock. Richard Driehaus’s fund, Driehaus Capital, also dropped its stock, about $4.4 million worth. These moves are important to note, as aggregate hedge fund interest fell by 4 funds heading into Q3.

Let’s also examine hedge fund activity in other stocks – not necessarily in the same industry as Ligand Pharmaceuticals Inc. (NASDAQ:LGND) but similarly valued. We will take a look at 2U Inc (NASDAQ:TWOU), RLJ Lodging Trust (NYSE:RLJ), The Timken Company (NYSE:TKR), and Tetra Tech, Inc. (NASDAQ:TTEK). This group of stocks’ market valuations are closest to LGND’s market valuation.

As you can see these stocks had an average of 21.5 hedge funds with bullish positions and the average amount invested in these stocks was $144 million. That figure was $533 million in LGND’s case. RLJ Lodging Trust (NYSE:RLJ) is the most popular stock in this table. On the other hand 2U Inc (NASDAQ:TWOU) is the least popular one with only 11 bullish hedge fund positions. Ligand Pharmaceuticals Inc. (NASDAQ:LGND) is not the most popular stock in this group but hedge fund interest is still above average. This is a slightly positive signal but we’d rather spend our time researching stocks that hedge funds are piling on. Our calculations showed that top 15 most popular stocks) among hedge funds returned 24.2% through April 22nd and outperformed the S&P 500 ETF (SPY) by more than 7 percentage points. Unfortunately LGND wasn’t nearly as popular as these 15 stock and hedge funds that were betting on LGND were disappointed as the stock returned -7.3% and underperformed the market. If you are interested in investing in large cap stocks with huge upside potential, you should check out the top 15 most popular stocks) among hedge funds as 13 of these stocks already outperformed the market this year.