While the market driven by short-term sentiment influenced by uncertainty regarding the future of the interest rate environment in the US, declining oil prices and the trade war with China, many smart money investors kept their optimism regarding the current bull run in the fourth quarter, while still hedging many of their long positions. However, as we know, big investors usually buy stocks with strong fundamentals, which is why we believe we can profit from imitating them. In this article, we are going to take a look at the smart money sentiment surrounding Liberty Media Corporation (NASDAQ:FWONA).

Liberty Media Corporation (NASDAQ:FWONA) investors should pay attention to a decrease in hedge fund sentiment recently. FWONA was in 19 hedge funds’ portfolios at the end of December. There were 21 hedge funds in our database with FWONA positions at the end of the previous quarter. Our calculations also showed that FWONA isn’t among the 30 most popular stocks among hedge funds.

What have hedge funds been doing with Liberty Media Corporation (NASDAQ:FWONA)? 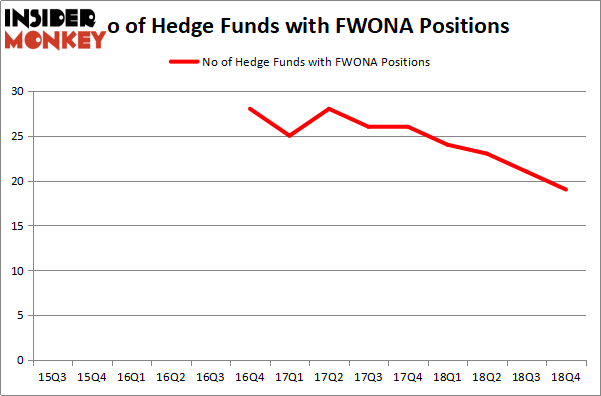 More specifically, Ancient Art (Teton Capital) was the largest shareholder of Liberty Media Corporation (NASDAQ:FWONA), with a stake worth $75.6 million reported as of the end of September. Trailing Ancient Art (Teton Capital) was Southeastern Asset Management, which amassed a stake valued at $69.6 million. Odey Asset Management Group, Ashe Capital, and CQS Cayman LP were also very fond of the stock, giving the stock large weights in their portfolios.

Judging by the fact that Liberty Media Corporation (NASDAQ:FWONA) has faced a decline in interest from the aggregate hedge fund industry, logic holds that there lies a certain “tier” of hedgies that decided to sell off their entire stakes in the third quarter. Intriguingly, Howard Marks’s Oaktree Capital Management said goodbye to the largest investment of all the hedgies monitored by Insider Monkey, totaling an estimated $24.2 million in stock. Brian Ashford-Russell and Tim Woolley’s fund, Polar Capital, also cut its stock, about $5.3 million worth. These transactions are intriguing to say the least, as total hedge fund interest fell by 2 funds in the third quarter.

As you can see these stocks had an average of 17 hedge funds with bullish positions and the average amount invested in these stocks was $350 million. That figure was $272 million in FWONA’s case. GrubHub Inc (NYSE:GRUB) is the most popular stock in this table. On the other hand Erie Indemnity Company (NASDAQ:ERIE) is the least popular one with only 11 bullish hedge fund positions. Liberty Media Corporation (NASDAQ:FWONA) is not the most popular stock in this group but hedge fund interest is still above average. Our calculations showed that the top 15 most popular stocks among hedge funds returned 21.3% year-to-date through April 8th and outperformed the S&P 500 ETF (SPY) by more than 5 percentage points. Hedge funds were also right about betting on FWONA, though not to the same extent, as the stock returned 19.6% and outperformed the market as well.