During the fourth quarter the Russell 2000 ETF (IWM) lagged the larger S&P 500 ETF (SPY) by nearly 7 percentage points as investors worried over the possible ramifications of rising interest rates. The hedge funds and institutional investors we track typically invest more in smaller-cap stocks than an average investor (i.e. only 298 S&P 500 constituents were among the 500 most popular stocks among hedge funds), and we have seen data that shows those funds paring back their overall exposure. Those funds cutting positions in small-caps is one reason why volatility has increased. In the following paragraphs, we take a closer look at what hedge funds and prominent investors think of Liberty Broadband Corp (NASDAQ:LBRDA) and see how the stock is affected by the recent hedge fund activity.

Liberty Broadband Corp (NASDAQ:LBRDA) investors should pay attention to a decrease in support from the world’s most elite money managers in recent months. Our calculations also showed that LBRDA isn’t among the 30 most popular stocks among hedge funds.

At the end of the fourth quarter, a total of 19 of the hedge funds tracked by Insider Monkey held long positions in this stock, a change of -14% from the previous quarter. On the other hand, there were a total of 26 hedge funds with a bullish position in LBRDA a year ago. With the smart money’s capital changing hands, there exists a few key hedge fund managers who were adding to their stakes considerably (or already accumulated large positions). 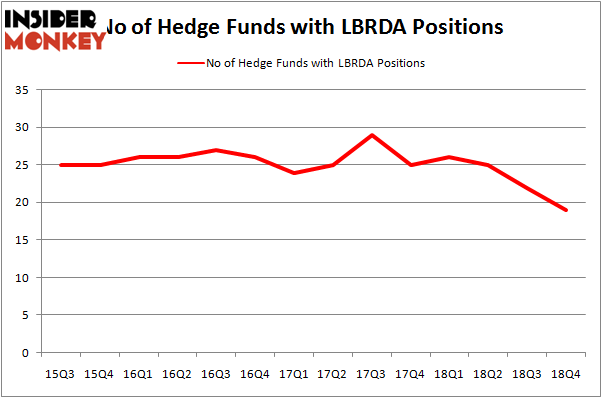 When looking at the institutional investors followed by Insider Monkey, FPR Partners, managed by Bob Peck and Andy Raab, holds the largest position in Liberty Broadband Corp (NASDAQ:LBRDA). FPR Partners has a $99.9 million position in the stock, comprising 2.6% of its 13F portfolio. The second largest stake is held by Boykin Curry of Eagle Capital Management, with a $86.2 million position; 0.4% of its 13F portfolio is allocated to the stock. Other members of the smart money that are bullish include D. E. Shaw’s D E Shaw, William Crowley, William Harker, and Stephen Blass’s Ashe Capital and Roberto Mignone’s Bridger Management.

Since Liberty Broadband Corp (NASDAQ:LBRDA) has faced a decline in interest from the aggregate hedge fund industry, logic holds that there was a specific group of hedge funds that decided to sell off their positions entirely heading into Q3. Intriguingly, Michael Pausic’s Foxhaven Asset Management sold off the largest investment of the “upper crust” of funds followed by Insider Monkey, comprising about $23.2 million in stock, and Jim Simons’s Renaissance Technologies was right behind this move, as the fund said goodbye to about $3.2 million worth. These transactions are interesting, as aggregate hedge fund interest dropped by 3 funds heading into Q3.

As you can see these stocks had an average of 24.5 hedge funds with bullish positions and the average amount invested in these stocks was $388 million. That figure was $499 million in LBRDA’s case. MSCI Inc (NYSE:MSCI) is the most popular stock in this table. On the other hand Magellan Midstream Partners, L.P. (NYSE:MMP) is the least popular one with only 12 bullish hedge fund positions. Liberty Broadband Corp (NASDAQ:LBRDA) is not the least popular stock in this group but hedge fund interest is still below average. Our calculations showed that top 15 most popular stocks among hedge funds returned 19.7% through March 15th and outperformed the S&P 500 ETF (SPY) by 6.6 percentage points. A few hedge funds were also right about betting on Liberty Broadband as the stock returned 14.6% and outperformed the market as well. You can see the entire list of these shrewd hedge funds here.