Is Lannett Company, Inc. (LCI) A Good Stock To Buy According To Hedge Funds?

A whopping number of 13F filings filed with U.S. Securities and Exchange Commission has been processed by Insider Monkey so that individual investors can look at the overall hedge fund sentiment towards the stocks included in their watchlists. These freshly-submitted public filings disclose money managers’ equity positions as of the end of the three-month period that ended September 30, so let’s proceed with the discussion of the hedge fund sentiment on Lannett Company, Inc. (NYSEAMEX:LCI).

In Lannett Company, Inc. (NYSEAMEX:LCI)’s case, it looks like smart money is turning more bullish bullish. The number of long hedge fund positions (among the funds in our database) advanced by two between July and September. The level and the change in hedge fund popularity aren’t the only variables you need to analyze to decipher hedge funds’ perspectives. A stock may witness a boost in popularity but it may still be less popular than similarly priced stocks. That’s why at the end of this article we will examine companies such as Array Biopharma Inc (NASDAQ:ARRY), Red Rock Resorts Inc (NASDAQ:RRR), and CIRCOR International, Inc. (NYSE:CIR) to gather more data points.

With all of this in mind, let’s take a gander at the recent action encompassing Lannett Company, Inc. (NYSEAMEX:LCI).

What have hedge funds been doing with Lannett Company, Inc. (NYSEAMEX:LCI)?

At the end of September, a total of 14 of the hedge funds tracked by Insider Monkey were long Lannett Company, up by 17% from the previous quarter. The graph below displays the number of hedge funds with bullish position in LCI over the last five quarters. With the smart money’s positions undergoing their usual ebb and flow, there exists a select group of key hedge fund managers who were increasing their holdings meaningfully (or already accumulated large positions). 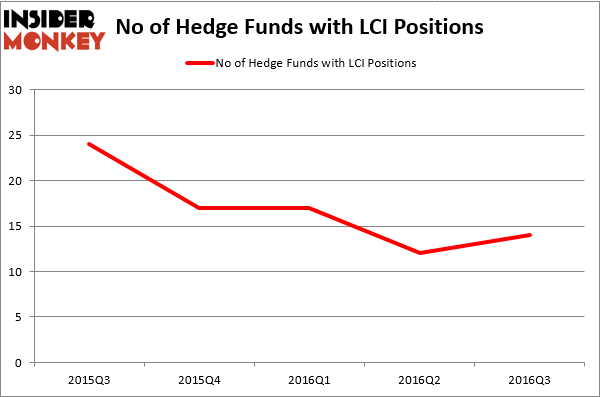 According to Insider Monkey’s hedge fund database, Philippe Laffont’s Coatue Management holds the most valuable position in Lannett Company, Inc. (NYSEAMEX:LCI). Coatue Management has a $42 million position in the stock, comprising 0.5% of its 13F portfolio. The second largest stake is held by Gotham Asset Management, led by Joel Greenblatt, holding a $7.4 million position; 0.1% of its 13F portfolio is allocated to the company. We should note that none of these hedge funds are among our list of the 100 best performing hedge funds which is based on the performance of their 13F long positions in non-microcap stocks.

Best Performing Hedge Funds Strategy
Download a free copy of our newsletter and see the details inside!
Hedge Fund Resource Center
Related News
A Look At 5 Stocks Which Are Trending On Wednesday Do Hedge Funds Love Lannett Company, Inc. (LCI)? Here is What Hedge Funds Think About Dynavax Technologies Corporation (DVAX) Do Hedge Funds and Insiders Love SciClone Pharmaceuticals, Inc. (SCLN)? Depomed Inc (DEPO): Hedge Funds Are Bearish and Insiders Are Undecided, What Should You Do? Is Sucampo Pharmaceuticals, Inc. (SCMP) Going to Burn These Hedge Funds? Hedge Funds Are Crazy About Dynavax Technologies Corporation (DVAX) 11 Best Science YouTube Channels To Watch 10 Most Famous Cubist Paintings 5 Countries That Have the Most Drones
Billionaire Hedge Funds