Lamar Advertising Company (REIT) (NASDAQ:LAMR) was in 19 hedge funds’ portfolios at the end of the third quarter of 2018. LAMR shareholders have witnessed an increase in activity from the world’s largest hedge funds lately. There were 18 hedge funds in our database with LAMR positions at the end of the previous quarter. Our calculations also showed that LAMR isn’t among the 30 most popular stocks among hedge funds.

How have hedgies been trading Lamar Advertising Company (REIT) (NASDAQ:LAMR)?

At Q3’s end, a total of 19 of the hedge funds tracked by Insider Monkey were long this stock, a change of 6% from one quarter earlier. On the other hand, there were a total of 19 hedge funds with a bullish position in LAMR at the beginning of this year. With the smart money’s capital changing hands, there exists a select group of noteworthy hedge fund managers who were adding to their holdings significantly (or already accumulated large positions). 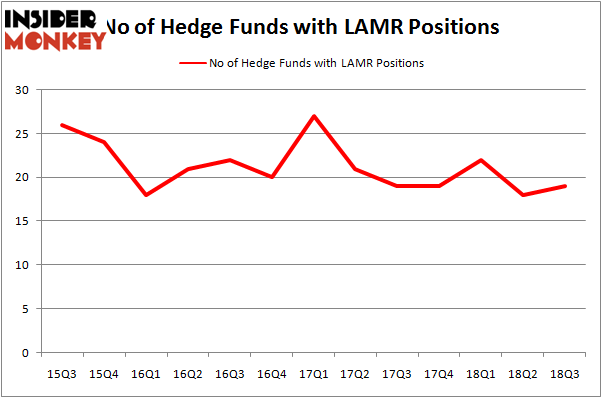 More specifically, Renaissance Technologies was the largest shareholder of Lamar Advertising Company (REIT) (NASDAQ:LAMR), with a stake worth $147 million reported as of the end of September. Trailing Renaissance Technologies was Citadel Investment Group, which amassed a stake valued at $74.6 million. Waratah Capital Advisors, Water Street Capital, and Two Sigma Advisors were also very fond of the stock, giving the stock large weights in their portfolios.

With a general bullishness amongst the heavyweights, some big names have been driving this bullishness. Stevens Capital Management, managed by Matthew Tewksbury, initiated the most outsized position in Lamar Advertising Company (REIT) (NASDAQ:LAMR). Stevens Capital Management had $1.3 million invested in the company at the end of the quarter. Dmitry Balyasny’s Balyasny Asset Management also made a $1.1 million investment in the stock during the quarter. The other funds with new positions in the stock are Paul Tudor Jones’s Tudor Investment Corp, George Hall’s Clinton Group, and Matthew Hulsizer’s PEAK6 Capital Management.

As you can see these stocks had an average of 23 hedge funds with bullish positions and the average amount invested in these stocks was $614 million. That figure was $311 million in LAMR’s case. Okta, Inc. (NASDAQ:OKTA) is the most popular stock in this table. On the other hand Autoliv Inc. (NYSE:ALV) is the least popular one with only 13 bullish hedge fund positions. Lamar Advertising Company (REIT) (NASDAQ:LAMR) is not the least popular stock in this group but hedge fund interest is still below average. This is a slightly negative signal and we’d rather spend our time researching stocks that hedge funds are piling on. In this regard OKTA might be a better candidate to consider a long position.