The market has been volatile in the last few months as the Federal Reserve finalized its rate cuts and uncertainty looms over trade negotiations with China. Small cap stocks have been hit hard as a result, as the Russell 2000 ETF (IWM) has underperformed the larger S&P 500 ETF (SPY) by more than 10 percentage points over the last 12 months. SEC filings and hedge fund investor letters indicate that the smart money seems to be paring back their overall long exposure since summer months, though some funds increased their exposure dramatically at the end of Q3 and the beginning of Q4. In this article, we analyze what the smart money thinks of La Jolla Pharmaceutical Company (NASDAQ:LJPC) and find out how it is affected by hedge funds’ moves.

La Jolla Pharmaceutical Company (NASDAQ:LJPC) shares haven’t seen a lot of action during the third quarter. Overall, hedge fund sentiment was unchanged. The stock was in 13 hedge funds’ portfolios at the end of September. The level and the change in hedge fund popularity aren’t the only variables you need to analyze to decipher hedge funds’ perspectives. A stock may witness a boost in popularity but it may still be less popular than similarly priced stocks. That’s why at the end of this article we will examine companies such as Farmland Partners Inc (NYSE:FPI), Investar Holding Corporation (NASDAQ:ISTR), and MannKind Corporation (NASDAQ:MNKD) to gather more data points. Our calculations also showed that LJPC isn’t among the 30 most popular stocks among hedge funds (click for Q3 rankings and see the video below for Q2 rankings).

At the moment there are a large number of tools shareholders put to use to analyze publicly traded companies. A duo of the most innovative tools are hedge fund and insider trading indicators. We have shown that, historically, those who follow the top picks of the top money managers can outperform the S&P 500 by a healthy amount (see the details here).

We leave no stone unturned when looking for the next great investment idea. For example Europe is set to become the world’s largest cannabis market, so we check out this European marijuana stock pitch. One of the most bullish analysts in America just put his money where his mouth is. He says, “I’m investing more today than I did back in early 2009.” So we check out his pitch. We read hedge fund investor letters and listen to stock pitches at hedge fund conferences. We also rely on the best performing hedge funds‘ buy/sell signals. Let’s view the latest hedge fund action encompassing La Jolla Pharmaceutical Company (NASDAQ:LJPC).

What have hedge funds been doing with La Jolla Pharmaceutical Company (NASDAQ:LJPC)? 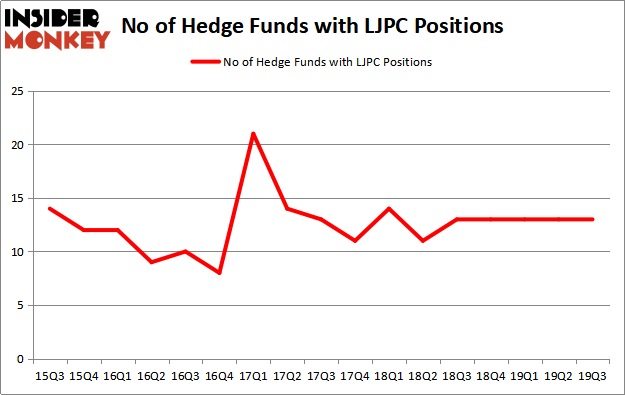 Of the funds tracked by Insider Monkey, Kevin C. Tang’s Tang Capital Management has the biggest position in La Jolla Pharmaceutical Company (NASDAQ:LJPC), worth close to $43.5 million, comprising 7.4% of its total 13F portfolio. The second largest stake is held by Baker Bros. Advisors, managed by Julian Baker and Felix Baker, which holds a $13.7 million position; the fund has 0.1% of its 13F portfolio invested in the stock. Some other members of the smart money that hold long positions comprise Jerome Pfund and Michael Sjostrom’s Sectoral Asset Management, Kris Jenner, Gordon Bussard, Graham McPhail’s Rock Springs Capital Management and Israel Englander’s Millennium Management. In terms of the portfolio weights assigned to each position Tang Capital Management allocated the biggest weight to La Jolla Pharmaceutical Company (NASDAQ:LJPC), around 7.44% of its 13F portfolio. Sectoral Asset Management is also relatively very bullish on the stock, setting aside 1.76 percent of its 13F equity portfolio to LJPC.

Since La Jolla Pharmaceutical Company (NASDAQ:LJPC) has faced a decline in interest from hedge fund managers, it’s safe to say that there were a few hedgies that elected to cut their entire stakes last quarter. Interestingly, Michael Castor’s Sio Capital sold off the largest position of the “upper crust” of funds monitored by Insider Monkey, totaling close to $12.1 million in call options, and Ken Griffin’s Citadel Investment Group was right behind this move, as the fund cut about $0.2 million worth. These bearish behaviors are interesting, as aggregate hedge fund interest stayed the same (this is a bearish signal in our experience).

As you can see these stocks had an average of 5.5 hedge funds with bullish positions and the average amount invested in these stocks was $10 million. That figure was $80 million in LJPC’s case. Farmland Partners Inc (NYSE:FPI) is the most popular stock in this table. On the other hand RGC Resources, Inc. (NASDAQ:RGCO) is the least popular one with only 1 bullish hedge fund positions. Compared to these stocks La Jolla Pharmaceutical Company (NASDAQ:LJPC) is more popular among hedge funds. Our calculations showed that top 20 most popular stocks among hedge funds returned 37.4% in 2019 through the end of November and outperformed the S&P 500 ETF (SPY) by 9.9 percentage points. Unfortunately LJPC wasn’t nearly as popular as these 20 stocks and hedge funds that were betting on LJPC were disappointed as the stock returned -68.9% during the first two months of the fourth quarter and underperformed the market. If you are interested in investing in large cap stocks with huge upside potential, you should check out the top 20 most popular stocks among hedge funds as 70 percent of these stocks already outperformed the market in Q4.