The market has been volatile in the fourth quarter as the Federal Reserve continued its rate hikes to normalize the interest rates. Small cap stocks have been hit hard as a result, as the Russell 2000 ETF (IWM) has underperformed the larger S&P 500 ETF (SPY) by nearly 7 percentage points. SEC filings and hedge fund investor letters indicate that the smart money seems to be paring back their overall long exposure since summer months, and the funds’ movements is one of the reasons why the major indexes have retraced. In this article, we analyze what the smart money thinks of KLX Energy Services Holdings, Inc. (NASDAQ:KLXE) and find out how it is affected by hedge funds’ moves.

KLX Energy Services Holdings, Inc. (NASDAQ:KLXE) was in 9 hedge funds’ portfolios at the end of December. KLXE investors should pay attention to a decrease in support from the world’s most elite money managers recently. There were 21 hedge funds in our database with KLXE holdings at the end of the previous quarter. Our calculations also showed that KLXE isn’t among the 30 most popular stocks among hedge funds.

At Q4’s end, a total of 9 of the hedge funds tracked by Insider Monkey were long this stock, a change of -57% from one quarter earlier. By comparison, 0 hedge funds held shares or bullish call options in KLXE a year ago. With hedgies’ sentiment swirling, there exists a select group of notable hedge fund managers who were increasing their holdings significantly (or already accumulated large positions). 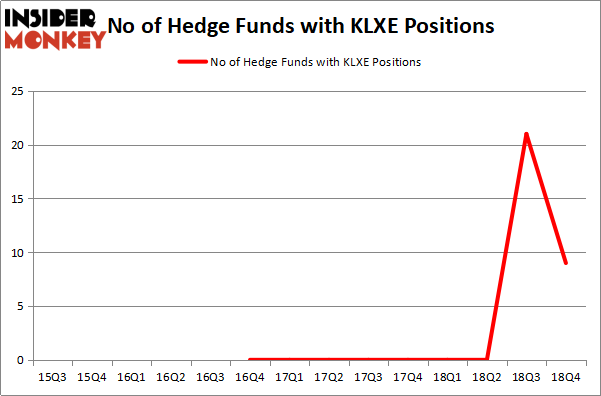 According to publicly available hedge fund and institutional investor holdings data compiled by Insider Monkey, GAMCO Investors, managed by Mario Gabelli, holds the number one position in KLX Energy Services Holdings, Inc. (NASDAQ:KLXE). GAMCO Investors has a $10.4 million position in the stock, comprising 0.1% of its 13F portfolio. The second largest stake is held by Royce & Associates, managed by Chuck Royce, which holds a $9.3 million position; 0.1% of its 13F portfolio is allocated to the stock. Some other members of the smart money that hold long positions contain Frederick DiSanto’s Ancora Advisors, Benjamin A. Smith’s Laurion Capital Management and Mark Lee’s Forest Hill Capital.

Due to the fact that KLX Energy Services Holdings, Inc. (NASDAQ:KLXE) has witnessed falling interest from the entirety of the hedge funds we track, logic holds that there is a sect of hedge funds that slashed their positions entirely by the end of the third quarter. Intriguingly, Tom Sandell’s Sandell Asset Management cut the biggest position of all the hedgies followed by Insider Monkey, comprising about $10.5 million in stock. Clint Carlson’s fund, Carlson Capital, also dumped its stock, about $4.3 million worth. These moves are important to note, as aggregate hedge fund interest was cut by 12 funds by the end of the third quarter.

As you can see these stocks had an average of 9.75 hedge funds with bullish positions and the average amount invested in these stocks was $92 million. That figure was $42 million in KLXE’s case. Navigator Holdings Ltd (NYSE:NVGS) is the most popular stock in this table. On the other hand Independence Holding Company (NYSE:IHC) is the least popular one with only 3 bullish hedge fund positions. KLX Energy Services Holdings, Inc. (NASDAQ:KLXE) is not the least popular stock in this group but hedge fund interest is still below average. Our calculations showed that top 15 most popular stocks) among hedge funds returned 24.2% through April 22nd and outperformed the S&P 500 ETF (SPY) by more than 7 percentage points. A small number of hedge funds were also right about betting on KLXE as the stock returned 24.7% and outperformed the market by an even larger margin.