Is Kellogg Company (NYSE:K) A Good Stock To Buy?

We at Insider Monkey have gone over 700 13F filings that hedge funds and prominent investors are required to file by the SEC The 13F filings show the funds’ and investors’ portfolio positions as of December 31st. In this article, we look at what those funds think of Kellogg Company (NYSE:K) based on that data.

Kellogg Company (NYSE:K) has seen an increase in hedge fund interest of late. K was in 27 hedge funds’ portfolios at the end of the fourth quarter of 2018. There were 25 hedge funds in our database with K holdings at the end of the previous quarter. Our calculations also showed that K isn’t among the 30 most popular stocks among hedge funds. 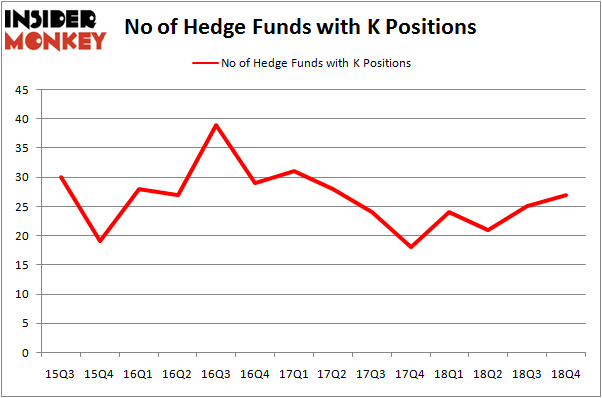 Among these funds, Renaissance Technologies held the most valuable stake in Kellogg Company (NYSE:K), which was worth $107.7 million at the end of the third quarter. On the second spot was Pzena Investment Management which amassed $56.7 million worth of shares. Moreover, Citadel Investment Group, GAMCO Investors, and Two Sigma Advisors were also bullish on Kellogg Company (NYSE:K), allocating a large percentage of their portfolios to this stock.

As one would reasonably expect, specific money managers were leading the bulls’ herd. Marshall Wace LLP, managed by Paul Marshall and Ian Wace, initiated the most outsized position in Kellogg Company (NYSE:K). Marshall Wace LLP had $16.4 million invested in the company at the end of the quarter. D. E. Shaw’s D E Shaw also initiated a $4.3 million position during the quarter. The other funds with new positions in the stock are Peter Rathjens, Bruce Clarke and John Campbell’s Arrowstreet Capital, Matthew Hulsizer’s PEAK6 Capital Management, and Andre F. Perold’s HighVista Strategies.

As you can see these stocks had an average of 27.75 hedge funds with bullish positions and the average amount invested in these stocks was $915 million. That figure was $329 million in K’s case. Parker-Hannifin Corporation (NYSE:PH) is the most popular stock in this table. On the other hand Willis Towers Watson Public Limited Company (NASDAQ:WLTW) is the least popular one with only 25 bullish hedge fund positions. Kellogg Company (NYSE:K) is not the least popular stock in this group but hedge fund interest is still below average. This is a slightly negative signal and we’d rather spend our time researching stocks that hedge funds are piling on. Our calculations showed that top 15 most popular stocks among hedge funds returned 19.7% through March 15th and outperformed the S&P 500 ETF (SPY) by 6.6 percentage points. Unfortunately Kellogg wasn’t in this group. Hedge funds that bet on Kellogg were disappointed as the stock lost 3.6% and underperformed the market. If you are interested in investing in large cap stocks, you should check out the top 15 hedge fund stocks as 13 of these outperformed the market.

Here is What Hedge Funds Think About Credit Suisse Group (CS)
Monthly Newsletter Strategy
Download a free copy of our newsletter and see the details inside!
Hedge Fund Resource Center
Related News
Hedge Funds Are Crazy About Kellogg Company (K) Why Food Stocks May Spoil in Your Portfolio in 2018 The 15 Most Popular Snack Brands in the World 11 Most Popular Snacks In The World 11 Most Ridiculous Lawsuits, Settlements, and Victories of All Time Cochineal Insects Products: 7 Foods Made With Crushed Bugs How Kellogg Company (K) Stacks Up Against Its Peers Hedge Funds Have Never Been This Bullish On Visa Inc (V) Ten of the Most Common Addictions 13 African Countries with the Largest White Population in 2018
Billionaire Hedge Funds