Is Kansas City Southern (KSU) A Good Stock To Buy?

Kansas City Southern (NYSE:KSU) shares haven’t seen a lot of action during the second quarter. Overall, hedge fund sentiment was unchanged. The stock was in 26 hedge funds’ portfolios at the end of June. The level and the change in hedge fund popularity aren’t the only variables you need to analyze to decipher hedge funds’ perspectives. A stock may witness a boost in popularity but it may still be less popular than similarly priced stocks. That’s why at the end of this article we will examine companies such as Vornado Realty Trust (NYSE:VNO), Elanco Animal Health Incorporated (NYSE:ELAN), and Ally Financial Inc (NYSE:ALLY) to gather more data points. Our calculations also showed that KSU isn’t among the 30 most popular stocks among hedge funds (view the video below). 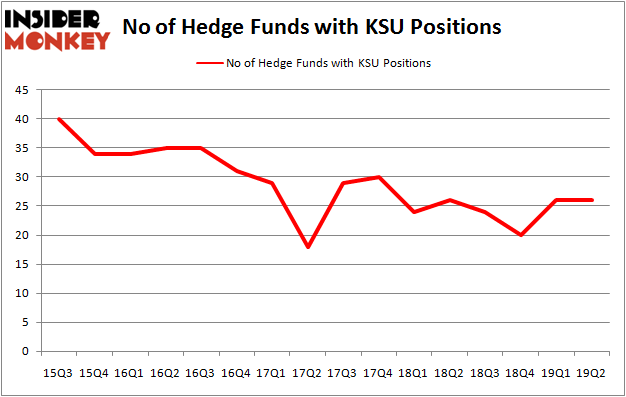 Unlike some fund managers who are betting on Dow reaching 40000 in a year, our long-short investment strategy doesn’t rely on bull markets to deliver double digit returns. We only rely on hedge fund buy/sell signals. We’re going to take a peek at the latest hedge fund action regarding Kansas City Southern (NYSE:KSU).

What does smart money think about Kansas City Southern (NYSE:KSU)?

Heading into the third quarter of 2019, a total of 26 of the hedge funds tracked by Insider Monkey were bullish on this stock, a change of 0% from the first quarter of 2019. By comparison, 26 hedge funds held shares or bullish call options in KSU a year ago. With the smart money’s capital changing hands, there exists an “upper tier” of noteworthy hedge fund managers who were adding to their stakes substantially (or already accumulated large positions).

Of the funds tracked by Insider Monkey, Winton Capital Management, managed by David Harding, holds the biggest position in Kansas City Southern (NYSE:KSU). Winton Capital Management has a $38.9 million position in the stock, comprising 0.8% of its 13F portfolio. Sitting at the No. 2 spot is AQR Capital Management, managed by Cliff Asness, which holds a $35 million position; the fund has less than 0.1%% of its 13F portfolio invested in the stock. Some other professional money managers with similar optimism encompass Gregg Moskowitz’s Interval Partners, Ken Fisher’s Fisher Asset Management and Jorge Paulo Lemann’s 3G Capital.

Seeing as Kansas City Southern (NYSE:KSU) has experienced bearish sentiment from the entirety of the hedge funds we track, it’s safe to say that there is a sect of hedge funds that slashed their positions entirely last quarter. At the top of the heap, Jonathan Barrett and Paul Segal’s Luminus Management dropped the biggest investment of the 750 funds tracked by Insider Monkey, comprising an estimated $92.2 million in call options. Brandon Haley’s fund, Holocene Advisors, also dropped its call options, about $48.7 million worth. These transactions are important to note, as aggregate hedge fund interest stayed the same (this is a bearish signal in our experience).

As you can see these stocks had an average of 34.75 hedge funds with bullish positions and the average amount invested in these stocks was $1437 million. That figure was $371 million in KSU’s case. Ally Financial Inc (NYSE:ALLY) is the most popular stock in this table. On the other hand Vornado Realty Trust (NYSE:VNO) is the least popular one with only 27 bullish hedge fund positions. Compared to these stocks Kansas City Southern (NYSE:KSU) is even less popular than VNO. Hedge funds clearly dropped the ball on KSU as the stock delivered strong returns, though hedge funds’ consensus picks still generated respectable returns. Our calculations showed that top 20 most popular stocks among hedge funds returned 24.4% in 2019 through September 30th and outperformed the S&P 500 ETF (SPY) by 4 percentage points. A small number of hedge funds were also right about betting on KSU as the stock returned 9.5% during the third quarter and outperformed the market by an even larger margin.