Hedge fund managers like David Einhorn, Bill Ackman, or Carl Icahn became billionaires through reaping large profits for their investors, which is why piggybacking their stock picks may provide us with significant returns as well. Many hedge funds, like Paul Singer’s Elliott Management, are pretty secretive, but we can still get some insights by analyzing their quarterly 13F filings. One of the most fertile grounds for large abnormal returns is hedge funds’ most popular small-cap picks, which are not so widely followed and often trade at a discount to their intrinsic value. In this article we will check out hedge fund activity in another small-cap stock: JetBlue Airways Corporation (NASDAQ:JBLU).

JetBlue Airways Corporation (NASDAQ:JBLU) was in 27 hedge funds’ portfolios at the end of the second quarter of 2019. JBLU shareholders have witnessed an increase in hedge fund interest recently. There were 26 hedge funds in our database with JBLU holdings at the end of the previous quarter. Although we see an improvement in the hedge fund sentiment towards JetBlue at the margin, overall hedge fund sentiment is still not as bullish as it was in 2015. Our calculations also showed that JBLU isn’t among the 30 most popular stocks among hedge funds.

Unlike this former hedge fund manager who is convinced Dow will soar past 40000, our long-short investment strategy doesn’t rely on bull markets to deliver double digit returns. We only rely on hedge fund buy/sell signals. Let’s take a gander at the key hedge fund action surrounding JetBlue Airways Corporation (NASDAQ:JBLU).

What have hedge funds been doing with JetBlue Airways Corporation (NASDAQ:JBLU)?

At the end of the second quarter, a total of 27 of the hedge funds tracked by Insider Monkey were bullish on this stock, a change of 4% from the previous quarter. The graph below displays the number of hedge funds with bullish position in JBLU over the last 16 quarters. With hedge funds’ capital changing hands, there exists a select group of noteworthy hedge fund managers who were adding to their stakes meaningfully (or already accumulated large positions). 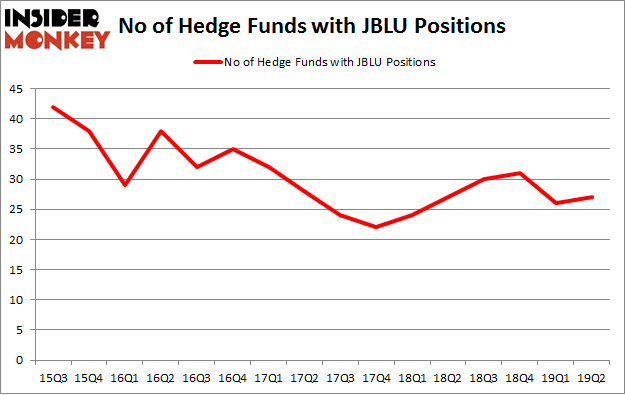 According to publicly available hedge fund and institutional investor holdings data compiled by Insider Monkey, PAR Capital Management, managed by Paul Reeder and Edward Shapiro, holds the number one position in JetBlue Airways Corporation (NASDAQ:JBLU). PAR Capital Management has a $162.3 million position in the stock, comprising 2.7% of its 13F portfolio. On PAR Capital Management’s heels is Renaissance Technologies which holds a $156.5 million position; the fund has 0.1% of its 13F portfolio invested in the stock. Other hedge funds and institutional investors that are bullish encompass Israel Englander’s Millennium Management, Hari Hariharan’s NWI Management and John Overdeck and David Siegel’s Two Sigma Advisors.

With a general bullishness amongst the heavyweights, specific money managers have been driving this bullishness. Millennium Management, managed by Israel Englander, assembled the biggest position in JetBlue Airways Corporation (NASDAQ:JBLU). Millennium Management had $62.1 million invested in the company at the end of the quarter. Charles Davidson and Joseph Jacobs’s Wexford Capital also initiated a $12.9 million position during the quarter. The other funds with brand new JBLU positions are Javier Velazquez’s Albar Capital, Sara Nainzadeh’s Centenus Global Management, and Peter Rathjens, Bruce Clarke and John Campbell’s Arrowstreet Capital.

As you can see these stocks had an average of 22.5 hedge funds with bullish positions and the average amount invested in these stocks was $555 million. That figure was $637 million in JBLU’s case. The New York Times Company (NYSE:NYT) is the most popular stock in this table. On the other hand Healthcare Trust Of America Inc (NYSE:HTA) is the least popular one with only 13 bullish hedge fund positions. JetBlue Airways Corporation (NASDAQ:JBLU) is not the most popular stock in this group but hedge fund interest is still above average. This is a slightly positive signal but we’d rather spend our time researching stocks that hedge funds are piling on. Our calculations showed that top 20 most popular stocks among hedge funds returned 24.4% in 2019 through September 30th and outperformed the S&P 500 ETF (SPY) by 4 percentage points. Unfortunately JBLU wasn’t nearly as popular as these 20 stocks and hedge funds that were betting on JBLU were disappointed as the stock returned -9.4% during the third quarter and underperformed the market. If you are interested in investing in large cap stocks with huge upside potential, you should check out the top 20 most popular stocks (see the video below) among hedge funds as many of these stocks already outperformed the market so far this year.