Hedge fund managers like David Einhorn, Dan Loeb, or Carl Icahn became billionaires through reaping large profits for their investors, which is why piggybacking their stock picks may provide us with significant returns as well. Many hedge funds, like Paul Singer’s Elliott Management, are pretty secretive, but we can still get some insights by analyzing their quarterly 13F filings. One of the most fertile grounds for large abnormal returns is hedge funds’ most popular small-cap picks, which are not so widely followed and often trade at a discount to their intrinsic value. In this article we will check out hedge fund activity in another small-cap stock: Jack Henry & Associates, Inc. (NASDAQ:JKHY).

Jack Henry & Associates, Inc. (NASDAQ:JKHY) was in 13 hedge funds’ portfolios at the end of September. JKHY has seen a decrease in hedge fund interest in recent months. There were 15 hedge funds in our database with JKHY holdings at the end of the previous quarter. The level and the change in hedge fund popularity aren’t the only variables you need to analyze to decipher hedge funds’ perspectives. A stock may witness a boost in popularity but it may still be less popular than similarly priced stocks. That’s why at the end of this article we will examine companies such as FMC Technologies, Inc. (NYSE:FTI), Parsley Energy Inc (NYSE:PE), and EQT GP Holdings LP (NYSE:EQGP) to gather more data points.

What have hedge funds been doing with Jack Henry & Associates, Inc. (NASDAQ:JKHY)?

At Q3’s end, a total of 13 of the hedge funds tracked by Insider Monkey were long this stock, a fall of 13% from the second quarter of 2016. The graph below displays the number of hedge funds with bullish position in JKHY over the last 5 quarters. With hedgies’ sentiment swirling, there exists a select group of key hedge fund managers who were boosting their holdings substantially (or already accumulated large positions). 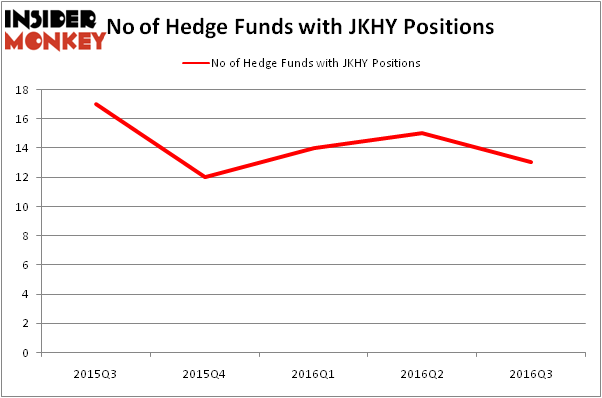 When looking at the institutional investors followed by Insider Monkey, Chuck Royce’s Royce & Associates has the most valuable position in Jack Henry & Associates, Inc. (NASDAQ:JKHY), worth close to $50.6 million. Coming in second is East Side Capital (RR Partners), led by Steven Richman, holding a $48.3 million position; 2.3% of its 13F portfolio is allocated to the company. Other peers with similar optimism include Cliff Asness’ AQR Capital Management, Jim Simons’ Renaissance Technologies and Israel Englander’s Millennium Management. We should note that none of these hedge funds are among our list of the 100 best performing hedge funds which is based on the performance of their 13F long positions in non-microcap stocks.

We already know that not all hedge funds are bullish on the stock and some hedge funds actually cut their positions entirely. It’s worth mentioning that Ken Griffin’s Citadel Investment Group cut the biggest stake of the 700 funds monitored by Insider Monkey, comprising about $4 million in stock. George Hall’s fund, Clinton Group, also cut its stock, about $1.1 million worth.

As you can see these stocks had an average of 30 hedge funds with bullish positions and the average amount invested in these stocks was $601 million. That figure was $172 million in JKHY’s case. Parsley Energy Inc (NYSE:PE) is the most popular stock in this table. On the other hand EQT GP Holdings LP (NYSE:EQGP) is the least popular one with only 3 bullish hedge fund positions. Jack Henry & Associates, Inc. (NASDAQ:JKHY) is not the least popular stock in this group but hedge fund interest is still below average. This is a slightly negative signal and we’d rather spend our time researching stocks that hedge funds are piling on. In this regard PE might be a better candidate to consider taking a long position in.